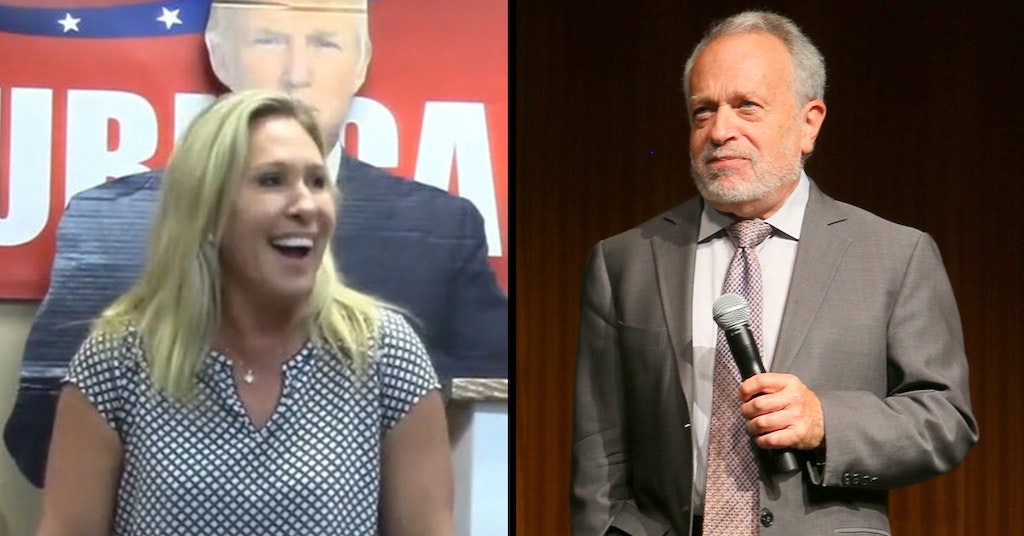 Marjorie Taylor Greene is a danger to democracy, and to the ability of the government to do its job safely and for all people. Her deranged attacks on everyone from other members of Congress to school shooting victims have proven this time and time again, along with her willingness to gleefully spread misinformation and throw her support behind politicians accused of sex trafficking minors.

Many, many logical and well-informed people have made the point: Greene has to go.

Former Secretary of Labor Robert Reich has called for as much time and time again during Greene’s short—yet far too long—stint in Congress so far.

“Folks, this is not complicated,” he tweeted in March. “If you harass and incite violence against your colleagues, you do not belong in Congress. Expel Marjorie Taylor Greene.”

On Sunday, he again tweeted something similar, on the heels of Greene’s reprehensible comparison of being asked to wear a mask to how Nazis marked Jews with yellow stars so that they could round up, torture, and murder them during the Holocaust.

This time, Greene took note and took issue, complaining about Reich’s misspelling of her name.

And falling back on the only thing she knows how to do—making something a personal attack and blaming communism or socialism.

And yes, the woman complaining about a missing “e” really did leave an “e” out of Berkeley.

And then she touted false information that Berkeley is funded by the Chinese government, citing a report that said Chinese people and Chinese Americans have given more money to a variety of “higher education institutions such as UC Berkeley.”

As usual, people had to then spend their time correcting Greene on basic information, although it’s apparent she has zero interest in facts unless they support her divisive and egocentric agenda.

And they also had to explain to her who Robert Reich is and why he’s far more valuable to society than she could ever hope to be.

It’s getting hard to remember a time when sitting members of Congress actually did their jobs instead of spent their time harassing colleagues, getting into idiotic Twitter fights, and pushing wild conspiracy theories, but we should definitely go back to that. And yes, it would involve Greene getting as far, far away from American politics as possible.