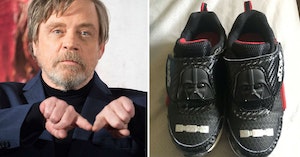 Mark Hamill Replies To Little Girl Asking If “Star Wars” Is For Girls, Too

Mark Hamill continues to be one of the world’s best celebrities on Twitter after he found and responded to a rather old tweet from a mother asking him, on behalf of her daughter, if he thought Star Wars was for girls as well as for boys. The five-year-old girl had picked out some super cool Darth Vader shoes to wear to school and “a boy at school said Star Wars is for boys, according to mother Kristal Foster.

“She said Star Wars is for girls too,” Foster tweeted. “What do you think @HamillHimself?”

Hamill’s response has people falling in love with him all over again.

I think Luke & Han are lucky Leia took over their "rescue" on the Death Star or it would've been a very short movie. https://t.co/GFauW2LBEE

“I think Luke & Han are lucky Leia took over their ‘rescue’ on the Death Star or it would’ve been a very short movie,” he said.

He’s not wrong, and he was the one who played Luke, so he knows what he’s talking about.

Foster originally posted her tweet back in February 2019 and hasn’t been very active on Twitter since, so she hasn’t yet responded to Hamill’s late reply to her question. Hopefully, her daughter still has amazing taste in footwear and will be happy to hear from the man herself that yes, she is allowed to like Star Wars, and in fact, there could be no Star Wars without girls.

Space is not gender specific. Space is for everyone.

Well, who am I to argue with Grandmaster Skywalker?

The ladies of SW history don’t get enough credit for their level of heroism…if you think it’s just for us guys, dig up some Legends material and prepare to be proven wrong…

IIRC, Han Solo said Luke was the brains of the operation.

You know, the farm boy who’d just gone offworld for the first time in his life.

You guys are lucky you made it to the detention level, frankly.

Meanwhile, some had their own little Star Wars fans to share.

This little girl is now 13. She shares her love of Star Wars with her dad. And her love of Kylo Ren with her mom! pic.twitter.com/Y7RJH0S4jz

My daughter Khaleesi had this same argument with a boy at school so for the next week she went to school wearing Star Wars socks and wearing Leia hairstyles in protest (which really annoyed this boy ????). No one tells my daughter she can’t like Star Wars lol pic.twitter.com/QA9aB5ZBLw

Star Wars inspires generation after generation of strong women. Princesses even. Meet my 1-year-old niece. Already a force to be reckoned with. pic.twitter.com/cN1dYze3HR

Star Wars is for everyone. My daughter Nancy had Vader shoes but they are too small for her now. She loves Star Wars and does cosplay alot! ???????? pic.twitter.com/wdyAQKvj6Y

Strong and adorable, they are.