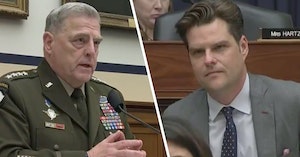 ‘What Is Wrong With Understanding?’: Military Leader Clashes With Congressional Republicans Over Critical Race Theory

The military has come under fire lately from Republican officers who believe they are becoming too “woke” and inclusive. But one military leader is pushing back.

Several Republicans brought up the non-issue during a hearing regarding the Defense Department budget this week. Representative Mike Waltz specifically referred to a course at the United States Military Academy that he claimed teaches critical race theory, saying that he’s heard from cadets who have “alarm and…concern about how divisive this type of teaching is that is rooted in Marxism.”

But Chairman of the Joint Chiefs of Staff General Mark Milley pushed back at the criticism, pointing out that reading the works of Karl Marx and others never made him a communist.

“I do think it’s important for those of us in uniform to be open-minded and be widely read,” he said. “And it is important that we train and we understand.”

Milley also dismissed the criticism that there’s something wrong with learning about “white rage” in a country where white supremacists are still a violent and dangerous group.

“I want to understand white rage, and I’m white. I want to understand it. So what is it that caused thousands of people to assault this building and try to overturn the Constitution of the United States of America?” he asked. “What is wrong with understanding, having some situational understanding about the country for which we are here to defend?”

Milley’s response didn’t satisfy Republicans who are determined to pretend learning about the systemic racism and racist origins of America, or the issue of white supremacy still prevalent today, is genuinely harmful to the country as a whole.

But while Matt Gaetz, who is still under investigation for trafficking and obstruction of justice, and his colleagues continue to be dismissive of the United States military for wanting its service members to be well-educated, others applauded Milley for appearing both articulate and open-minded.