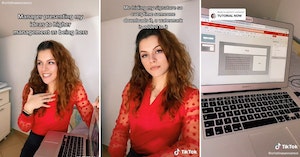 TikTok user and marketing professional Cristina Sevcenco went viral with a recent video saying that she added a hidden signature to a recent work presentation because her manager was showing them to her own bosses without giving Sevcenco any credit. Bosses stealing the work of their employees and presenting it as their own is far from an unheard of problem, but this worker knew how to fix it so that everyone would know that it was her effort they were benefiting from.

Plus, she let the rest of us in on her fun, with style.

“Watch me get urgent calls ‘Cristina, there is a watermark on the ppt, could you please attach?'” she wrote about the video.

According to the overlay text, adding a hidden signature makes it so that every time someone downloads her presentation, a watermark will appear on it declaring it to be the work of Cristina Sevcenco and no one else. Watermarks cannot be removed except by the person with access to the original file.

After the original video went viral, racking up over 3.7 million views, and commenters asked, Sevcenco posted a longer video as a tutorial, showing others how they can add this kind of signature to their own work to ensure that nobody steals the credit. It’s a good thing someone asked, too, because she was surprised to learn that other people in the industry don’t know how to use this basic protection method.

“I just don’t get it, how this is not common knowledge,” she says. “You should research on how to watermark your work because in a corporation, especially the ones that I have worked in, it’s very toxic and it’s very common for people to actually steal your work.”

However, she admitted that she herself had to learn this the hard way after she caught her manager at a previous job presenting her work to her bosses after said manager put her own name on “every slide,” giving Sevcenco zero credit for two weeks of research and putting together the slideshow. After that, she looked up how to use watermarks so it wouldn’t happen again.

She then goes through the process of adding the hidden signature on her laptop, showing how the watermark won’t be evident until it’s actually presented or someone tries to edit a slide. If anyone else wants it removed, they will have to contact the person who actually created the presentation, ensuring that full credit is received where due.

She remarks that this kind of thing shouldn’t be necessary in any workplace, but sadly, in many of them, it is.

“If you actually have to use this kind of trick, I am so sorry for you, and you are definitely in a really toxic environment,” she says.

She further advises that this same process can be done on nearly any program in the standard Microsoft Office package, not just PowerPoint.

Although some commenters were salty, many expressed appreciation for the tutorial and others told their own stories of managers stealing their work in the same way.

“My manager stood up in front of a room of 100, spoke about some future visions of mine and pretended he’d had a discussion with a CEO from elsewhere,” said one TikTok user.

“I learn this the hard way so the second time my manager presented my idea without her checking my presentation it showed my name,” wrote another.