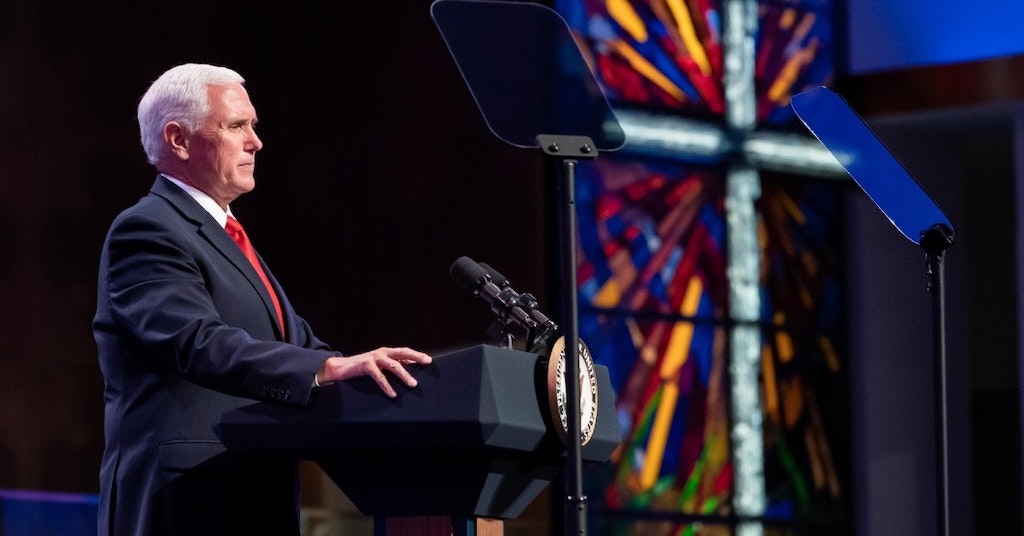 
A choir of over 100 individuals sang and blew their spit particles at Vice President Mike Pence and others watching the performance in a megachurch in Dallas, Texas on Sunday. None of the choir wore masks as they sang, although Pence did, and continued to wear it aside from when he gave a personal address to the congregation which included appeals for people to wear masks.

The First Baptist Church choir performed multiple times and donned masks while they were not singing at the vice president’s face.

A choir of more than 100 people performed without face masks at a robustly attended event in Texas that featured a speech by Vice President Mike Pence https://t.co/hoHlS4HyFz

As the number of new and active cases of COVID-19 spike once again in the U.S. after just leveling out and maybe barely falling before everyone rushed to go back to “normal,” Pence and others from the Trump administration have changed their tunes on certain public health practices. According to CNN, Pence admitted that wearing masks helps to slow the spread of the virus.

“We know from experience, it will slow the spread of the coronavirus,” he said. That was, however, after the maskless choir sang for him and hundreds of others sitting in close quarters. The CDC dropped its recommendation against the gathering of church choirs in late May after pressure from the Trump administration to revise its guidelines and has not yet reinstated it despite spiking case numbers.

Somehow, the dropping of this recommendation came just weeks after the CDC published an in-depth report on how church choirs function as super-spreader events, with one choir in Washington state experiencing a whopping 87 percent infection rate.

Texas is one of several southern states currently experiencing a severe surge in new COVID-19 cases. It’s so bad that Governor Greg Abbott had to once again limit business activity in the state by executive order and even admitted that he allowed bars to re-open too soon. Despite this, Pence praised Abbot for his “leadership” during the pandemic in his speech to the church.

“Working with your governor, we will put the health of the people of the Lone Star state first, and every single day, we will continue to reclaim our freedom and our way of life as each day we are one day closer to the day we put this pandemic past and when we do, with this governor and this president, we will bring Texas and America bigger and better than ever before,” Pence said.

Many people across the U.S., however, are not convinced that either Abbot or Pence are up for the job.

Great image – A full choir belting it out, not a mask between them and you in the front row. Given the rise in infections in #Texas and across #US irresponsible and no amount of bible thumping will suggest otherwise.

Texas has 570 new cases today and Mike Pence came to Dallas… spoke with a 100-person mask-less choir behind him… and told people to wear masks… while not wearing one… and talked about fixing the pandemic.

I love how the choir is singing, unmasked, and tightly packed, which is exactly what all choirs have been told not to do according to every medical expert on the earth. Way to go First Baptist and Pence! #killingthemwithsong

You're talking out both sides of your mouth @VP was the choir that sang wearing masks? No. Well?! What about that? What about TOO LITTLE TOO LATE @GovAbbott? Y'all are a just playing games while people die. #COVID19TX https://t.co/RXltXm0ql3

A sickness stalks the land: The president's approval numbers among Evangelicals is falling. Dr. Pence to the rescue. https://t.co/v6pyJh8XW4