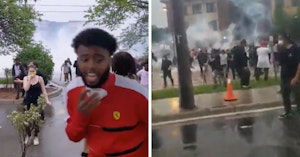 Minneapolis erupted in chaos on Tuesday after George Floyd, a Black man, was killed by a cop who knelt on his neck for around eight minutes straight, cutting off the circulation to his brain and resulting in his death. Footage of the killing, in which Floyd can be heard saying that he couldn’t breathe and bystanders beg the officer to simply move his knee from the man’s neck, shocked and outraged much of the nation.

The (alleged) killer cop and three others who stood by were fired and the FBI has launched a probe into the incident. Meanwhile, locals gathered in the thousands to protest police brutality and racism.

Protesters gathered at Chicago Ave. and East 38th Street in Minneapolis after the death of George Floyd. pic.twitter.com/ZV0Msh2Mwx

Protesters marched from the spot where Floyd was killed to the Minneapolis Police Department’s 3rd precinct building where they were met with riot police and more violence. Videos began to flood the internet showing huge clouds of tear gas and people surrounded the building and demanded that the killer cop be arrested and prosecuted for murder.

Fence to the squad parking lot is torn open. Cars being busted pic.twitter.com/g0ltLZGdWx

Some, in an apparent reaction to racial profiling and violence from the police, smashed the glass front door of the precinct and threw rocks at police vehicles. Others tagged cars and walls with messages such as “RIP George Floyd” and “ACAB,” which stands for “all cops are bastards.”

From there, Minneapolis police escalated to flashbangs, bear mace, stun grenades, more tear gas, and rubber bullets, some of which hit reporters simply trying to record the historic night.

I got hit w rubber bullet right after taking video of this mayhem scene. I was across the street from the precinct pic.twitter.com/qz1KHNADtQ

Many people on the ground and watching live feeds online compared this aggressive police response to the relatively subdued response to anti-mask protesters who entered the Michigan statehouse with long guns weeks ago. Photos show the anti-mask screaming directly in the faces of police officers while they stood pat. The vast majority of those protesters appeared white, and some were from anti-government militias.

It’s unclear how many injuries resulted from police using not-as-lethal weapons such as rubber bullets, but it doesn’t appear that there were any deaths. A shooting occurred near the protests in which someone was injured, but it’s unclear whether this was related to the demonstration.

Protesters speaking with CBS Minnesota put the blame for any violence that night on the police.

Minnesota—where protestors gather for #GeorgeFloyd— has:

MLK said “a riot is the language of the unheard.” It’s never about one incident. It’s a pattern of abuses that boil over pic.twitter.com/uAQz7xCV6B

Many protesters wore masks but felt that their demonstration was necessary in order to pressure law enforcement to prosecute one of their own.

“We’re here to let them know this can’t be tolerated, there will be severe consequences if they continue to kill us this will not go on another day,” said another marcher.