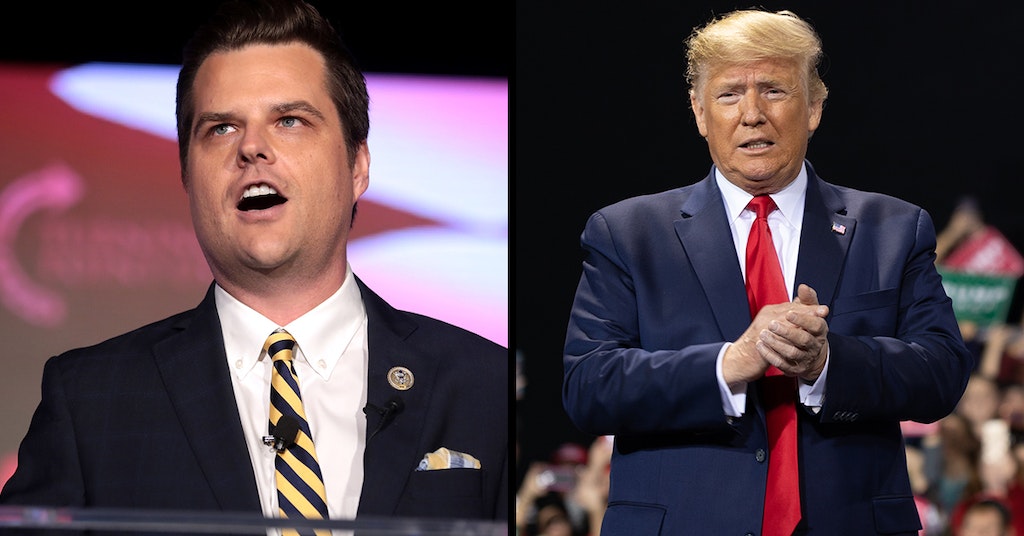 
Long before news of Matt Gaetz being under investigation for possible sex trafficking became public, he requested a blanket preemptive pardon from then-president Trump, according to The New York Times.

It was Trump’s Department of Justice that initially began looking into Gaetz’s ties to Joel Greenberg, who was arrested on child sex trafficking charges last summer. It’s been suggested that the Florida congressman joined him in paying women for sex, and engaged in a sexual relationship with a 17-year-old that involved paying for her to travel with him, which would amount to sex trafficking.

Whether Gaetz knew of the investigation during the final days of Trump’s presidency is unclear, as are the question of whether Trump himself knew. But according to two sources, Gaetz approached the White House privately, either through Trump’s aides or to the president directly, to request preemptive pardons for both him and his allies in Congress for any existing crimes.

A representative for Gaetz has tried to shrug this latest allegation off as a mere misunderstanding by “entry-level political operatives,” insisting instead that Gaetz merely privately asked the White House for the same general blanket pardon that he asked for publicly.

Gaetz’s spokesperson insisted that “these comments have been on the record for some time, and President Trump even retweeted the congressman, who tweeted them out himself.”

But others have suggested that Gaetz’s public broad call for a pardon for everyone under the sun was merely a cover up for the private pardon he sought for himself according to the NYT sources.

Either way, there’s no scenario in which the controversial representative asking to be pardoned for unspecified crimes ahead of any charges being brought forth doesn’t make him look guilty.

The White House reportedly declined Gaetz’s request on the terms that offering a preemptive blanket pardon would set a bad precedent.

Trump’s camp has yet to comment publicly on the matter.