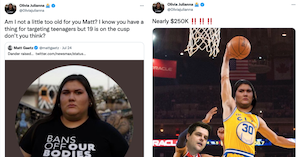 Florida Republican and all-around reprehensible human Matt Gaetz spent the past weekend at the Turning Point USA Student Action Summit in Tampa mocking women. The representative talked to young conservatives about abortion — namely, that fat and ugly women don’t need them because no one wants to have sex with them.

The logic is not strong with this one, folks. But we already knew that.

“Why is it that the women with the least likelihood of getting pregnant are the ones most worried about abortions? Nobody wants to impregnate you if you look like a thumb,” Gaetz said to his conservative audience. “These people are odious from the inside out. They’re like 5’2″, 350 pounds, and they’re like ‘Give me my abortions or I’ll get up and march and protest.'”

The 40-year-old Gaetz, who is under investigation over alleged sexual encounters with a 17-year-old and violating federal sex-trafficking law, then used his Twitter account and encouraged his followers to harass a 19-year-old abortion rights activist named Olivia Julianna.

“Its come to my attention that Matt Gaetz—alleged pedophile—has said that it’s always the ‘odious.. 5’2 350 pound’ women that ‘nobody wants to impregnate’ who rally for abortion,” Texas activist Julianna tweeted. “I’m actually 5’11. 6’4 in heels. I wear them so the small men like you are reminded of your place.”

Nice one! But she didn’t stop there.

“Am I not a little too old for you Matt?” Julianna asked in a follow-up. “I know you have a thing for targeting teenagers but 19 is on the cusp don’t you think?”

Folks applauded Julianna’s sassy comeback and courage to stand up to a bully.

Later, Julianna updated her Twitter to share that not only did she accumulate 20k new followers, but she managed to raise more than $230,000 for abortion funds because of these new followers’ donations.

In an interview with Teen Vogue, Julianna explained how she turned an ugly episode of body shaming into a victory: “I had an opportunity to have more attention. Matt had put a spotlight on me; he had given me a chance to rebut publicly and I think what he was expecting was for me to fall into an outrage cycle and he wanted me to be like, ‘This is horrendous, you’re evil, you should be canceled.’ He wants people to label him as a monster and free-speech absolutist and I don’t think he expected for me to respond in the way that I did — to fundraise for abortions. And he also didn’t expect me to bring up his criminal investigation. What a weirdo to talk about another teenager.”

“Whenever someone resorts to body shaming in an argument it’s because they can’t intellectually and factually get their point across. He can claim he’s pro-life, pro-family, pro-child but the reality is this is a sitting congressman who voted against increased funding for baby formula during a shortage. When it comes down to helping families, it’s not Matt Gaetz. It’s me,” she added.