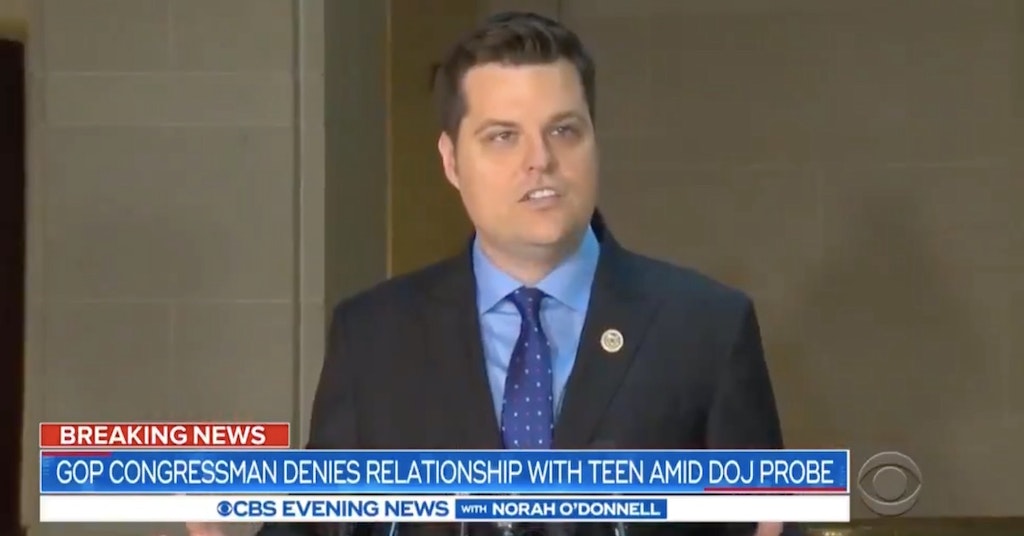 Republican Representative Matt Gaetz is being federally investigated for paying money to women with whom he had sex, the New York Times reports. This is just one of many stories pouring out about Gaetz, who was closely associated with Florida politician Joel Greenberg.

Greenberg was indicted in 2017 for trafficking a teen girl, and Gaetz is also being investigated for possibly having sex with the 17-year-old.

That may be up to the DOJ to determine, but ABC News reports that people who know Gaetz have said that his behavior at work does not indicate that he “cherishes” his past relationships. Anonymous sources told the Miami Herald that Gaetz and several other young male lawmakers had a “game” where they scored their sexual conquests.

The game used a point system, where “targets such as interns, staffers or other female colleagues in the state House” had different values. One of the categories was “virgin.”

It may only be a matter of time before Gaetz accidentally confesses to creating this game while viciously denying it. Viewers were astounded when during an interview with Fox News, he brought up allegations that there were “pictures of me with child prostitutes” which no one had heard about…

“There will be no such pictures because no such thing happened,” Gaetz said.

He did already admit to Axios that he has bought stuff and paid for stuff for some women.

“I have definitely, in my single days, provided for women I’ve dated. You know, I’ve paid for flights, for hotel rooms,” he stated. “I’ve been, you know, generous as a partner. I think someone is trying to make that look criminal when it is not.”

Who knows what he’ll confess to next.