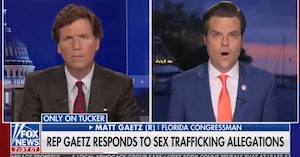 Florida Representative Matt Gaetz is under investigation for possible sex trafficking of a teenager — and he’s already finding ways to blame the Biden administration.

The New York Times broke the story that the Department of Justice has been looking into allegations that Gaetz was not only in a sexual relationship with a 17-year-old girl two years ago, but paid for her to travel with him across state lines, which would open him up to charges of sex trafficking.

Immediately after the claims came to light yesterday, Gaetz turned around and alleged that he was being extorted by a former DOJ official who promised to make the whole thing go away in exchange for $25 million.

“No part of the allegations against me are true,” he tweeted, adding that his father has been working with the FBI to wear a wire and get proof of the extortion claims.

Hours later, Gaetz dropped into Tucker Carlson’s show to again deny the allegations, in what Carlson himself then referred to as “one of the weirdest interviews I’ve ever conducted.”

Over the course of the conversation, Gaetz denied “traveling” with a “17-year-old woman,” defended the right to pay for travel and accommodations for anyone he is dating, dredged up sexual misconduct accusations made against Carlson 20 years ago, and brought up previously unpublicized claims that there are photos of him with child prostitutes, which he subsequently denied.

“I believe we are in an era of our politics now, Tucker, where people are smeared to try to take them out of the conversation,” Gaetz said.

And the specific former Justice Department employee who has been named in Gaetz’s allegations of extortion, David McGee, says he welcomes the exact same thing that the Congressman wants — for the FBI to release the recordings of the conversations Gaetz’s father had with McGee while wearing a wire. Gaetz claims these recordings will prove his innocence, whereas McGee says that if they exist, there will be nothing hinting at extortion on them.

“It’s completely false,” McGee said of the extortion claims. “It’s a blatant attempt to distract from the fact that he’s under investigation for sex trafficking of minors.”

The allegations against Gaetz are also reigniting reminders that he was the only vote against a sex trafficking law back in 2017.