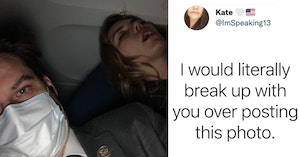 Florida representative Matt Gaetz, who is still under investigation for sex trafficking, got married  over the weekend, and yes, he still managed to find a way to be creepy in the process.

Gaetz and his new bride, Ginger Luckey, eloped to California, the same blue state Republicans love to bash when they aren’t vacationing there or taking its taxes to dig their own states out of the hole. But a picture presumably taken on the flight there caused a little bit of drama on the internet first.

Cloaked in shadow, Gaetz snapped a picture of him and his then-fiancé as she slept, sitting up, with her head tilted back, and her mouth wide open. It’s not a flattering photo and was clearly taken (and likely posted) without her knowledge.

“So blessed to be with the beautiful @LuckeyGinger,” Gaetz wrote, in a seemingly mocking tone.

Now, as far as awful things Gaetz has done or been accused of doing, this is way, way, way down the list. But it’s still a little bit creepy. One would think a 39-year-old who works in politics and has undoubtedly had a lot of hard lessons in social media and sharing photos online would be a little more discerning than to snap and post a pic of someone that mimics an 8th-grade prank, especially if it’s someone they supposedly love.

And people on Twitter had no qualms with telling Gaetz that this was a juvenile and somewhat creepy choice.

Luckey either didn’t have a problem with the photo or decided to go along with it for the sake of optics, retweeting it herself and responding to one of the critics with a snowflake emoji.

But all of this is ultimately overshadowed by the wedding itself, which wasn’t supposed to happen until next year, leaving people suspicious as to why it may have been moved up — and if it may have anything to do with the current investigation into the allegations against Gaetz.