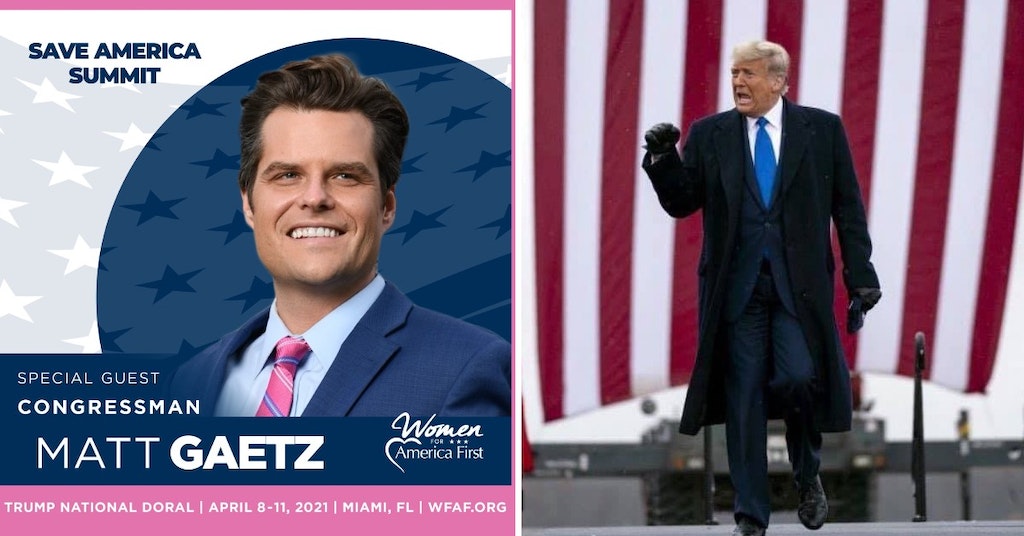 Photo via Women for America First/Facebook


In spite of facing down some very serious charges of trafficking underage girls across state lines, Representative Matt Gaetz will be speaking at an event for a pro-Trump woman’s group on Friday. The “Women for America First” (“America First,” by the way, is a slogan popularized by the KKK) will see him in Florida for their “Save America Summit,” something they organized after being involved in the planning for the “March for Trump” the preceded the assault on the Capitol on January 6.

This will be Gaetz’s first public appearance since he was hit with sexual assault allegations, and nobody to the Congressman’s left has missed the irony that it will be at an event for a women’s group.

“Rep Matt Gaetz has been a fearless leader in DC,” tweeted Women for America First. “Few members of Congress have been more willing than Matt to stand up & fight on behalf of President Trump & his America First Agenda.”

They’re certainly not wrong on that second part, as prior to the sex trafficking scandal, Gaetz faced heavy criticism and calls for investigations as one of the primary instigators of the attempted coup. This recently-revealed investigation should suffice, however, as Gaetz could face life in prison if found guilty.

Donald Trump himself recently issued a brief statement on the scandal, specifically addressing the rumors that Gaetz sought a blanket pardon from the former president in his final days in the White House, when the sex trafficking investigation was underway but still hidden from the public. The New York Times reported that two individuals inside the administration told them of this pardon-seeking, though it was never granted because doing so would have made Trump look worse than Gaetz does now for seeking the pardon in the first place.

“Congressman Matt Gaetz has never asked me for a pardon,” the two-sentence statement reads. “It must also be remembered that he has totally denied the accusations against him.”

It must also be remembered that denial of wrongdoing does not mean that someone did not do wrong, obviously.

Gaetz has made a number of mistakes during this investigation, including screwing up a sympathetic interview with Tucker Carlson, and posting about headlining a women’s event right now wasn’t the best decision, either.