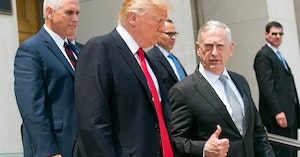 James Mattis, the former Secretary of Defense, has come out swinging in a scathing denouncement of President Trump and his continued attempts to divide the country.

Mattis’ remarks come days after peaceful protestors outside the White House were forcibly and violently dispersed from the area to clear the way for Trump to have a photo op with a Bible in front of a nearby church. And, some believe, to create an image suggesting protestors were rioting in order to justify Trump’s simultaneous proclamation that an increased presence of heavily armed military personnel would be the only way to stop protestors from committing “domestic terror.”

“When I joined the military, some 50 years ago, I swore an oath to support and defend the Constitution. Never did I dream that troops taking that same oath would be ordered under any circumstance to violate the Constitutional rights of their fellow citizens—much less to provide a bizarre photo op for the elected commander-in-chief, with military leadership standing alongside,” Mattis continued.

“Militarizing our response, as we witnessed in Washington, D.C., sets up a conflict—a false conflict—between the military and civilian society. It erodes the moral ground that ensures a trusted bond between men and women in uniform and the society they are sworn to protect, and of which they themselves are a part.”

While Mattis’s words were unwavering in their rebuke of Trump and his leadership, they also offered encouragement to the American people.

He called the equal rights and treatment demanded by protestors a “whole and unifying demand—one that all of us should be able to get behind,” and insisted that we “must not be distracted by a small number of lawbreakers.”

“We can come through this trying time stronger, and with a renewed sense of purpose and respect for one another,” he urged. “We must reject and hold accountable those in office who would make a mockery of our Constitution.”

That Mattis spoke up was somewhat surprising.

Mattis has notably kept quiet about his differences with Trump ever since he resigned in December 2018. In an earlier interview with The Atlantic, he said “there is a period in which I owe my silence,” elaborating that he felt he needed “to give the people who are still [in the administration] as much opportunity as possible to defend the country.”

Now, people are torn over whether he waited too long to speak up against Trump in defense of the United States, or if his words could still do some good.

“Probably the only thing Barack Obama & I have in common is that we both had the honor of firing Jim Mattis, the world’s most overrated General,” he wrote. “His nickname was ‘Chaos,’ which I didn’t like, & changed to ‘Mad Dog.’”

Mattis resigned in December 2018, partly in protest of Trump’s withdrawal of American forces from Syria. The nickname “Mad Dog” predates the Trump administration, and has circulated in the public since at least 2004.