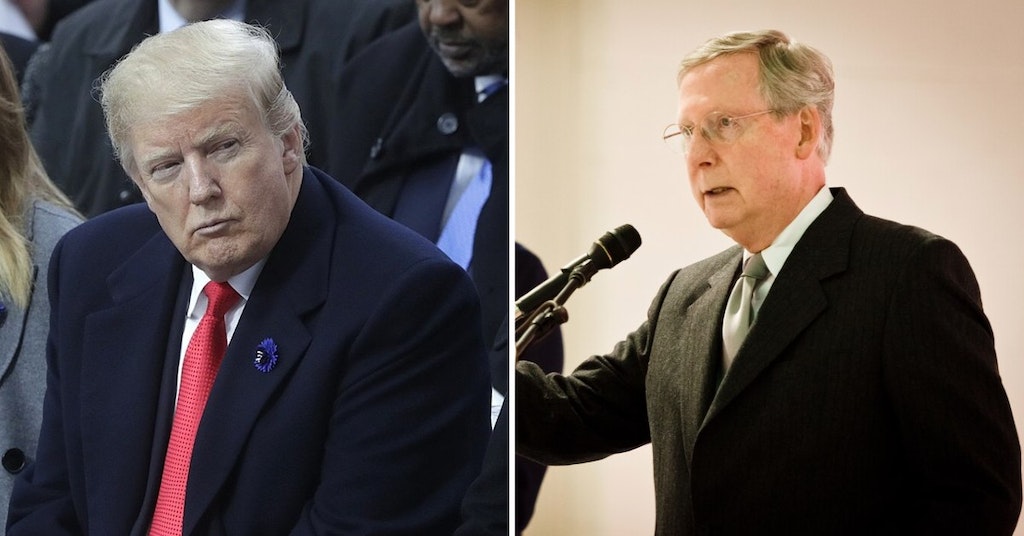 Photo via The Kremlin/Wikimedia Commons (CC BY 4.0), U.S. Air Force


The New York Times is reporting that “people familiar with his thinking” have said Senate Majority Leader (soon to be minority leader) Mitch McConnell is glad that Democrats are trying to impeach Donald Trump again.

In one of the more significant "huge if true" moments of our time, they're even saying that he "believes President Trump committed impeachable offenses."

House Democrats presented a new article of impeachment against Donald Trump, who was impeached for abuse of power and obstruction of congress just over a year ago, on Monday. This time, the charge is for inciting the violence that occurred at the Capitol last Wednesday, and they plan to hold a vote tomorrow.

Democrats have had to move quickly on their efforts to remove Trump from office as there is only just over a week left until Biden's inauguration. After Republicans objected to invoking the 25th amendment, they're reportedly not working all that hard to fight against the new impeachment efforts. According to the Times, House Minority Leader Kevin McCarthy isn't even bothering to formally lobby his fellow House Republicans to vote against it.

In fact, up to a dozen Republicans are expected to support the new article of impeachment. McConnell, however, is waiting to see exactly what the latest charge against Trump will be, but "has made clear in private discussions that he believes now is the moment to move on the weakened lame duck."

In less stellar news, the FBI is warning that Trump supporters appear to be planning further insurrections targeting all 50 state capitals should congress remove the outgoing president before his time is up. This includes an armed group that plans to descend on Washington D.C. again on January 16 and has threatened violence if Trump is removed via the 25th Amendment.

"The FBI received information about an identified armed group intending to travel to Washington, DC on 16 January," the FBI bulletin states. "They have warned that if Congress attempts to remove POTUS via the 25th Amendment, a huge uprising will occur."

Trump himself has, of course, denied any wrongdoing and said at his speech at Alamo, Texas today that attempting to invoke the amendment will "come back to haunt Joe Biden and the Biden administration." Other than that, he's back on the old "witch hunt" rhetoric when he's not patting himself on the back for the partial construction of his big racist border wall that Mexico was supposed to pay for.