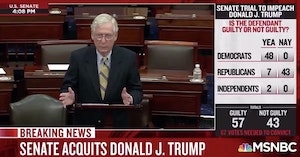 There may not be a single person in the United States who actually likes Mitch McConnell. The Senate Minority Leader has proven time and time again that he stands for nothing more than his own interests — enough to draw frustration and outrage out of people of all political walks of life.

It isn’t particularly surprising that McConnell voted to acquit former President Trump after his second impeachment trial, but the fact that he then went forward and placed the blame for the Capitol riots squarely on Trump’s shoulders mere moments after the vote concluded has prompted cries of hypocrisy.

“There’s no question,” he told the Senate. “President Trump is practically and morally responsible for provoking the events of the day. No question about it. The people who stormed this building believed they were acting on the wishes and instructions of their president.

“And having that belief was a foreseeable consequence of the growing crescendo of false statements, conspiracy theories, and reckless hyperbole, which the defeated president kept shouting into the largest megaphone on planet Earth.”

Let’s reiterate: McConnell himself voted to acquit former president Trump for his part in inciting the Capitol riot only moments before giving this speech.

He and 42 of his fellow Republicans looked at the evidence presented — evidence that we all watched play out publicly between November 3 and January 6 — and said no, Trump is not guilty.

Rather than actual consequences for provoking and supporting people who would have overthrown the government itself because they didn’t get their way, McConnell offered up nothing more than a stern scolding, while admitting Trump was, in fact, guilty.

Supposedly McConnell’s vote went the way it did because he didn’t feel right impeaching a former president—an argument that doesn’t hold water for the Kentucky senator, in particular, considering he was the one who ultimately refused to let the impeachment trial take place before Trump left office.

The disgust with this inconceivable failure to protect not only Americans but the core of American democracy left people livid.

It’s difficult to see where the country goes from here — how we can achieve “unity” of any sort when there are no consequences to inciting an insurrection to try to hold onto power because so many of the “establishment” members of one party choose to look the other way.

McConnell did say exactly one useful thing, however. He suggested pursuing criminal charges against Trump may be a viable course of action next. And considering the GOP Senate is too spineless to do their jobs, that sounds like a great place to start.