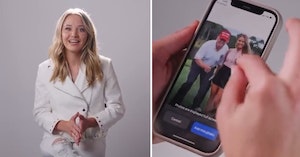 You might recall Kayleigh McEnany, one of four of Trump’s White House press secretaries during those harrowing years — the final one before Trump lost the 2020 election and who predicted that COVID would never reach the U.S. Her sister, Ryann McEnany, is launching a dating app for young conservatives (invite-only to keep out you dirty libs) called “The Right Stuff.” Because, and this may blow your mind, the word “right” can also mean “correct.”

“We’re sorry that you’ve had to endure years of bad dates and wasted time with people who don’t see the world our way — the right way,” McEnany says in a promo video.

At least it sounds like conservatives are giving up on their sad attempts to shame people who don’t think immigrants should be shot on sight into dating them with bi-monthly articles complaining that people ghost them when they find out their real beliefs. Now, instead of guilting or tricking people into dating them, they can keep their awful dates to themselves. Thanks, Ryann!

“First of all, it’s free to use,” says McEnany. “For my ladies, you’ll never have to pay, because we all get premium subscriptions for simply inviting a couple friends. Gentlemen, if you want access to premium, that’s on you.”

Dating apps are known to often have trouble maintaining a decent gender balance for straight people, largely because these apps can be anywhere from uncomfortable to a complete nightmare for women. Well, not the apps themselves, but the men who use them. We imagine this problem persists in dating apps targeting conservatives, which already exist.

But are they invite-only like your local racist country club? And do their promotions go out of their way to be explicitly transphobic?

“And by the way, those are the only two options: Ladies and gentlemen,” McEnany continues, later adding that there are “no pronouns necessary.”

Our favorite part of the promo is when she says she wants user to “put your best foot forward, which includes your favorite photos of yourself doing what you love” as the camera shows her selecting a photo of herself with Donald Trump in a MAGA hat on a golf course. Anything to kiss that man’s nether regions.

The Right Stuff follows similar right-wing dating apps such as Alex Jones’ “Dating Freedom Lovers,” Righter, Patrio, and Awake Dating. That last one is the only still in operation, and only time will tell how long McEnany’s attempt will last. In the meantime, the jokes are rolling in.