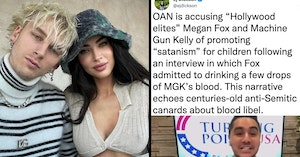 There was no shortage of people side-eyeing Megan Fox and Machine Gun Kelly’s revelation that they regularly drink one another’s blood, but we should have assumed the Christian right would take it a step further and start accusing them of promoting Satanic rituals to impressionable young children.

MGK and Fox admittedly have a weird, sometimes very questionable relationship, and not one everyone would like to emulate. After the actress mentioned they drank each other’s blood as part of getting engaged, Glamour UK recently asked for clarification as to how literal that was.

“It’s just a few drops, but yes, we do consume each other’s blood on occasion for ritual purposes only,” Fox replied.

Is it weird? Absolutely. Is it earth-shatteringly concerning? No, not really.

But One America News Network begs to differ. Or, possibly, they’re grasping at anything they can find to continue conservatives’ renewed Satanic Panic aimed at Hollywood elites and anyone not hurling their entire body at rightwing extremism.

“Out in the open, they tell you what they do, that they practice the rituals, and they literally have the ability to manipulate the minds of an entire generation of the youth as they watch this,” says a guy standing in front of a Turning Point USA screen on OAN.

Of course, one could say the exact same thing about Christians, with the prime difference being that MGK and Fox’s relationship ultimately impacts very few people whereas Christians who “practice the rituals” in the open and “manipulate the minds of an entire generation” are helping actively strip rights away from millions of people.

And there’s also the part where the Satanism part of this pearl clutchery is pure conjecture by these perpetual fearmongerers.

Unfortunately, their base is eating it up and regurgitating these talking points online.

But really, we’ve already done this. Can we be done with unnecessary reboots already?