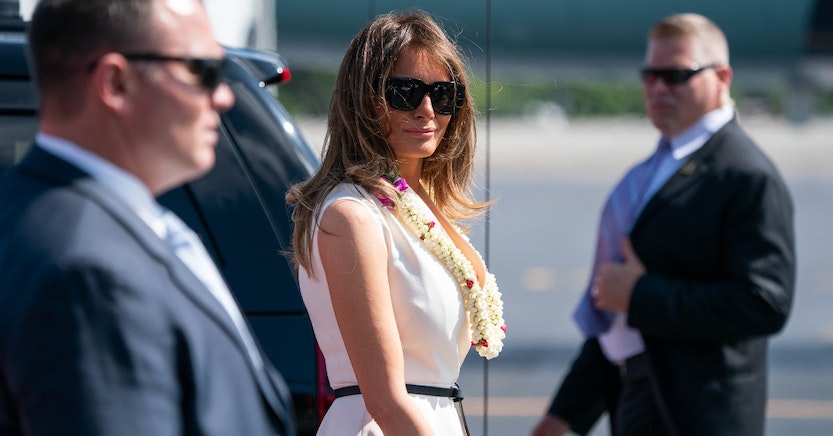 Photo via Anthony Quintano/Flickr (CC BY 2.0)

Another tell-all book about the Trumps has been released to the public, this one focusing on the author’s friendship with Melania Trump, coincidentally right after she was put under the spotlight for her weirdly intense stare right after fake-smiling at Ivanka. According to Politico, much of the book deals with the relationship between the current First Lady and Donald Trump’s favorite daughter, but another detail stood out to people as being absurdly racist.

The author, Stephanie Winston Wolkoff, is described as Melania’s former senior adviser and close friend, which would explain the title — Melania and Me: The Rise and Fall of My Friendship with the First Lady. Wolkoff was “heavily involved in the planning of the president’s inauguration” and then left the White House a little over a year later due to controversy over her role in the event. She also claims to have had a falling out with Melania two years ago, which would have been not long after Wolkoff’s exit.

In spite of this, the author reportedly had some praise for the First Lady, describing her “fun side” involving the use of emojis in text messages. However, it also lays out Melania’s racist side with a particularly shocking tidbit.

“In her book, she describes how Melania didn’t want to move to the White House right away in part because she didn’t want to have to use the same shower and toilet as former first lady Michelle Obama and was waiting for the bathroom to be renovated,” writes Politico’s Daniel Lippman.

Melania caught a lot of heat for refusing to move into the White House for months after Donald’s inauguration, which cost U.S. taxpayers millions in extra security for her home in New York. The First Lady claimed that her decision was for the benefit of her son Barron, who was attending school in New York at the time. Just months ago, another book claimed that the real reason for the moving delay was so that Melania could renegotiate her prenup with the President.

Trying to get more benefits out of a marriage contract isn’t a great reason for leaving the people with a massive security bill, but this latest claim that she didn’t want to use the same bathroom as the previous First Lady, who is Black, has people’s racism alarms ringing.

Melania has been accused of racism in the past, particularly for promoting the racist “birther” theories about former President Barack Obama which claimed that he was born in Kenya rather than in the U.S., as his birth certificate states. However, some are suggesting that this is simply a thing with rich people who don’t want their precious behinds touching anything touched by another person’s behind.