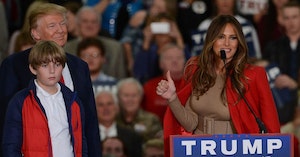 Photo via the White House/Wikimedia Commons (CC BY 3.0)

A newly released book about Melania Trump has revealed that the reason she took so long to move into the White House, costing taxpayers millions in extra security while she and Barron stayed in Trump Tower, was because she wanted to renegotiate the terms of her prenuptial agreement. The Art of Her Deal: The Untold Story of Melania Trump by Washington Post reporter Mary Jordan reveals that she had a “perceived calming effect” on Donald, and his friends and staffers were very eager for her to join him in D.C.

This allowed her to gain more favorable terms in the prenup, which previously “had not been incredibly generous” to her.

Melania Trump took her time moving to the White House. She wanted Barron to finish out his school year… but she was also renegotiating her prenup. From @marycjordan’s new book, ‘The Art of Her Deal.’ (Which is a really good read!) https://t.co/LqT9UZwNXI

“According to three people close to Trump, Jordan writes, Melania had finally renegotiated the prenup to her liking,” says Jada Yuan on the book. “She had already been looking out for Barron’s future by making sure he had dual citizenship in Slovenia, which will position him to work in Europe for the Trump Organization when he comes of age.”

Melania reportedly also wanted to make sure that Barron was not left out of the “family business” when he reached adulthood.

“She wanted proof in writing that when it came to financial opportunities and inheritance, Barron would be treated as more of an equal to Trump’s oldest three children,” Jordan wrote.

The book reportedly reveals that Melania is more like her husband than many people thought, jumping on opportunities, appearing to lie about her skills and achievements, and valuing loyalty above all else. Also, a lot of people like her less now, knowing that her costing taxpayers so much money was not for Barron’s health or education but to ensure he would be as rich and privileged as the rest of the Trumps.

Wow. It would cost taxpayers tens of millions of dollars in @SecretService expenses, but Melania stayed in Trump Tower after inauguration to sweeten her financial standing and prenuptial agreement with Trump, Per new book by @marycjordan
https://t.co/DT3csK8WZB

Melania, the myth of her own making is as big a liar as her husband. It is shameful this person is a First Lady. She leveraged her time in NYC in 2017 (we New Yorkers paid our tax dollars for her extra police protection) for a better pre nup deal. Sleazy. https://t.co/v2tLFCpnY5

Melania Trump is not a poor, slighted victim in any of this-she is worse. Just like her husband, she's a grifter who only cares about power and money while she uses her own child as an ethical shield to justify every despicable, greedy thing she does.

While Melania Trump is trending, here’s a reminder that she fed Trump’s shameless Obama birther conspiracy theory and isn’t some innocent bystander to Trump’s depravtiy.pic.twitter.com/0CSpsAlqdf

She claimed to have a bachelor’s degree but didn't graduate. There’s little evidence to back the claim she can speak four or five languages fluently. She allowed people to misrepresent her age. She plagiarized from Michelle Obama. And she's a birther.https://t.co/6Fx4vmFZya

I think all those "Melania is trapped in a life she never wanted" takes are finally gonna have to die. She knows exactly what her husband is doing & supports him. https://t.co/FVhUrlcdg1

Before anyone processes this as anything other than what it is…

Melania negotiated a better contract for her role in every terrible thing Trump has done.

Holding out for more money for your complicity makes you worse not better.

Throw out the whole family. They’re all bad.