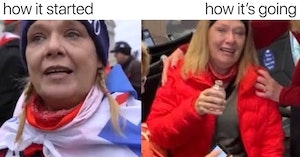 The “How It Started Vs. How It’s Going” Memes Are Hot As Capitol Rioters Get Arrested

As the days go by following the astonishing assault on the Capitol on January 6, more and more of the participants who were filmed and photographed in the act are being arrested to the delight of the rest of us. Though many were absolutely floored that the rioters were allowed to enter and leave the building with little resistance in the first place, it is vindicating to see those happy faces turn into mug shots.

Furthermore, the recent emergence of the “how it started vs. how it’s going” meme is fitting in perfectly with the ongoing arrests.

So far, arrests resulting from the Capitol riot have included the “QAnon Shaman,” the guy who put his feet up on Nancy Pelosi’s desk, the guy who stole Pelosi’s podium, the guy in the “Camp Auschwitz” shirt, and many others. A significant number of the rioters paraded into the Capitol without masks, and data captured from their widespread use of Parler has made finding these people even easier.

How is it going for the insurrectionists? Well, the QAnon Shaman refused to eat in jail because they don’t serve organic food. And when they’re not being arrested, others are getting fired or finding that they’ve been put on no-fly lists and are now stuck in D.C. as they wait to find out whether they will end up in prison.

There are likely to be many more of these coming in the future as the FBI conducts a thorough investigation into the attack, but for now, here are all the relevant memes we could find: