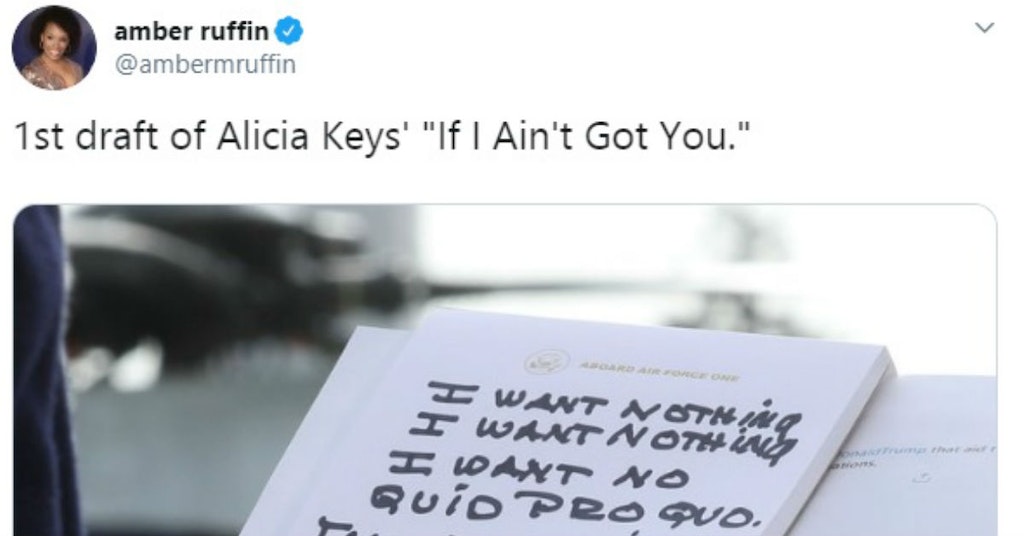 Amid the explosive testimony from Ambassador to the E.U. Gordon Sondland, people were equally baffled and amused by a photo of Donald Trump’s notes for his White House lawn statement on the Ukraine scandal that started with “I want nothing” twice scrawled out in black Sharpie.

Trump carried hand-written notes and print-outs of tweets as he left the White House. Photo by Getty's Mark Wilson. pic.twitter.com/kxROdam0qC

The notes were allegedly what Trump said to Sondland when he asked what it was the president wanted out of Ukraine, but nobody could seem to explain why he had to write “I want nothing” multiple times or why Trump loves writing in marker so much. Although, that last one might be self-explanatory.

Trump said in his statement that he “said it twice,” referring to “I want nothing,” but you’d think he could just remember that, or at least write “I want nothing x2.” Then again, that might look too much like math to him.

The memes on this were inevitable, if a little slow on the draw, likely delayed by everyone’s rushing to make a meme out of Sondland’s resting “if I’m going down I’m taking all of you with me” face. But one day later, there are enough memes to go around, mostly of people crediting what almost look like scribbled song lyrics to various artists.

Here are some of the best:

.@pattonoswalt made a tweet that showed Trump’s handwritten notes and the caption was simply “Morrissey voice:”.

Needless to say, I got inspired and put WAY to much effort into this. pic.twitter.com/heOiOhl90P

DEAR SLIM, YOU STILL AIN'T CALLED OR WROTE, I HOPE YOU HAVE A CHANCE
I AIN'T MAD, I JUST THINK IT'S FUCKED UP YOU DON'T ANSWER FANS
IF YOU DIDN'T WANNA TALK TO ME OUTSIDE YOUR CONCERT YOU DIDN'T HAV pic.twitter.com/uFIstpOcPd