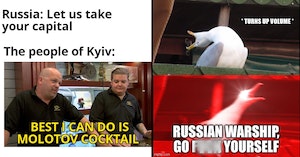 It’s been just about a week since Russian forces crossed the border into Ukraine and began an invasion that has now been almost universally condemned by nations around the world, inviting accusations of war crimes and generally making itself look like the villain. Though reports vary, it’s likely that hundreds of Ukrainian civilians have been killed and many more injured as Vladimir Putin has ordered bombings and airstrikes of apartment buildings, Holocaust memorial sites, and Ukrainian TV stations.

As the assault has dragged on, reportedly much longer than Putin and his military expected, more and more people have voiced their support for Ukraine as the citizens there show incredible bravery in defending their country, standing up to entire tanks and volunteering to fight in massive numbers. Even Russia’s own people are largely against the invasion, coming out by the thousands to protest in spite of the very real threat of arrest and persecution.

For most people around the world, there’s little they can do to help the people of Ukraine other than giving what money they can for civilian and refugee support and urging their nation’s leaders to help. However, even if it’s exactly the same as signing up to literally fight Russia, memes have abounded mocking Putin and his so far foiled attempts to capture the Ukrainian capital of Kyiv and celebrating the bravery of the Ukrainian resistance.

The official Twitter account for Ukraine has participated, and a new account titled “meme4Ukraine” has emerged to collect some of the best out there. Here are 25 of our personal favorites: