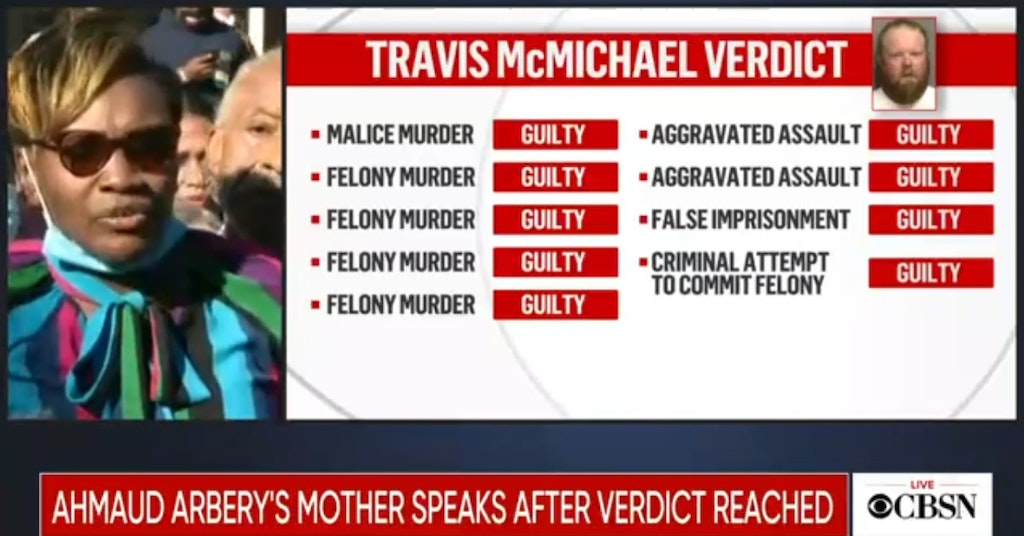 The three men who were charged with the pursuit, assault, and killing of Ahmaud Arbery while he was out for a run have been found guilty of multiple counts of murder as well as aggravated assault, false imprisonment, and criminal attempt to commit a felony. Travis McMichael was additionally convicted of malice, a crime in Georgia that refers to murder committed when “no considerable provocation appears and where all the circumstances of the killing show an abandoned and malignant heart.”

Travis’ father, Greg McMichael, and their neighbor William “Roddie” Bryan were found guilty of slightly less but still many charges, all but guaranteeing a long prison sentence for the three of them.

The three white men were arrested after they made the mutual decision to pursue Arbery in a vehicle when they saw him run by their homes, assuming he may have been fleeing the scene of a crime based on rumors that the Black man had committed crimes in the past. They attempted to force Arbery to stop, and when he refused, attacked him with a shotgun and shot him multiple times until dead.

The case was compared to a modern-day lynching and became a focus of the ongoing issue of racism and white supremacy in the U.S. The white men tried to claim self-defense, saying that Arbery attacked them and tried to take their gun, echoing the very recent trial of Kyle Rittenhouse in which the young white man was acquitted of all charges after killing two with an AR-style rifle during the Kenosha uprising.

The defense was highly criticized on Tuesday for their closing arguments in which they suggested that Arbery did not belong in the majority-white neighborhood where he was running and talked about his “long, dirty toenails.” This conclusion cemented the idea in many anti-racist minds that this murder was a racist hate crime. The McMichaels and Bryan still face federal hate crime charges, for which they will be tried starting in February 2022.

Black Americans and various anti-racist activists and supporters have expressed relief at this verdict, though many remain critical of the fact that it took many weeks and widespread protests in order to get Georgia authorities to charge the white men at all.

The delay in the charging of the McMichaels and Bryan was so egregious that the local district attorney, Jackie Johnson, has been charged with obstruction and violation of her oath of office after being accused of favoring Greg McMichael, a former employee of her office. It was around two months before charges were brought against the three men, and this only happened after video footage of the killing leaked to the public.

Still, many remain relieved that justice was done for Arbery and his loved ones in this case after the disappointment of the Rittenhouse trial, though they would prefer it if the racist murder had not occurred in the first place.