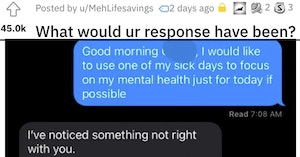 Everyone has probably had at least one boss who came back with some weird response after they asked for a day off, whether it was demanding to know details about why they were sick, acting passive aggressive about missing a shift, or some other unnecessary commentary that proves we’ve been wired to prioritize companies and work over the well-being of ourselves and others.

But a recent text from one Redditor’s boss may be one of the stranger responses you can get in this scenario.

u/MehLifesavings shared a conversation they had with a supervisor recently, explaining to readers, “Work was really draining the life out of me and [I] was on the verge of quitting, I asked for a mental health day and he responds with this.”

The actual exchange started out with the redditor checking in at 6:21am and letting their boss know that they were taking a sick day to “focus on my mental health just for today,” even throwing in a polite “if possible.”

The manager reciprocated with no such tact.

“I’ve noticed something not right with you,” he wrote. “I don’t know what kind of mental issues you’re going through but sitting around thinking about it all day will not help you that’s just my opinion but it’s up to you.”

First of all, the idea that the original poster wanting to “focus on [their] mental health” was interpreted as wanting to sit around all day thinking about it is objectively hilarious.

Taking a mental health day can mean anything from engaging in activities you love for a little mood booster to sleeping to catching up on tasks that have left you stressed out to just doing absolutely nothing. You don’t take a sick day so that you can contemplate being sick rather than do work, you take a sick day to help your body rest so it can heal — the same concept, most people understand, applies to taking a mental health day.

But more than that, the text was just bizarrely rude and not the kind of thing a normal person would say to a close friend, let alone an employee.

Readers also took this opportunity to remind people that no matter how much they may demand an explanation about why you’re taking a sick day, you don’t have to actually tell employers that information.

In this particular instance, although the employee noted they found the manager’s response “disrespectful,” they opted to simply ignore his comments and not show up for work. And next time, they’ll just say they aren’t coming in because they’re sick and that’s that.