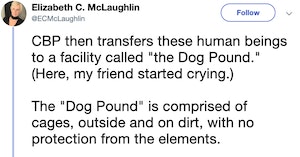 Last week, CEO and attorney Elizabeth C. McLaughlin penned a Twitter thread that laid out in devastating detail the extent of the atrocities committed by the Trump administration along the U.S.-Mexico border.

Fair warning: It is horrifying and heartbreaking.

IF YOU CARE ABOUT WHAT TRUMP IS DOING AT THE BORDER, you need to read and share this thread. @jacobsoboroff @JuliaEAinsley please read this.

I have just gotten off the phone with a friend who is a legal volunteer in Border Patrol facilities.

She explains that her knowledge of the situation comes from a friend who has done two tours as a legal advocate inside Border Patrol facilities and who “passed along information about what is happening there that indicates that the Trump Administration is violating every basic human right, and is moving toward military ‘solutions.'” 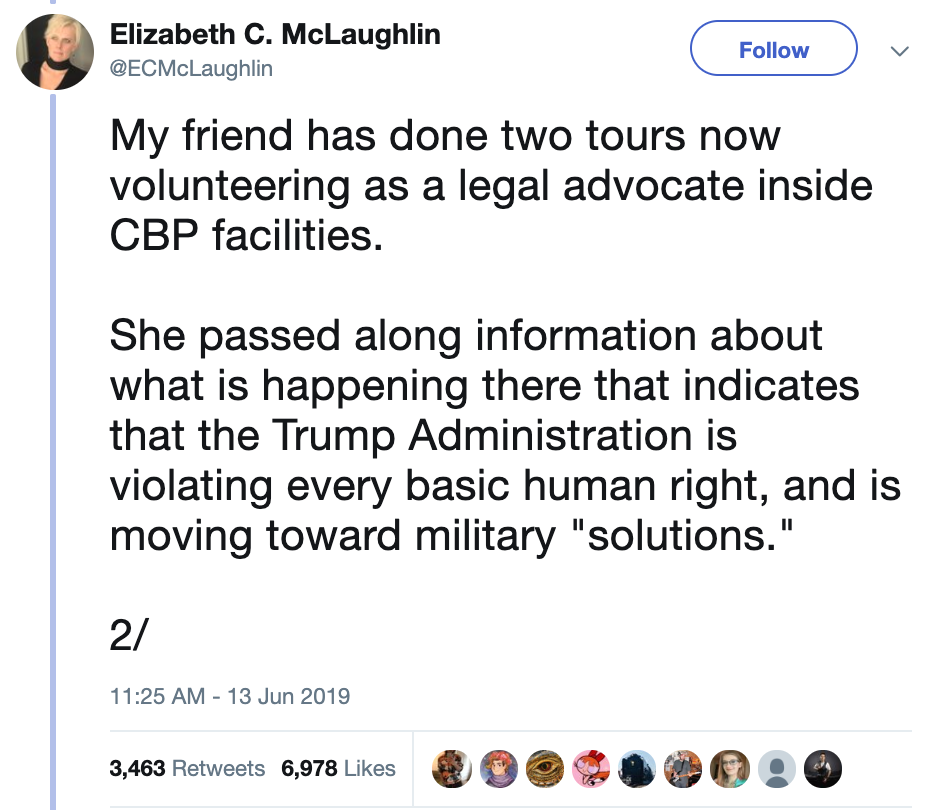 When refugees seeking asylum turn themselves in to the Border Patrol outposts, they are handed over to an area called ‘The Dog Pound,’ which is exactly what it sounds like.

For the record, it is perfectly legal to cross the border from any point and seek asylum in the United States, meaning no Mexican refugees should be 1) detained in the first place 2) without probably cause 3) and a lawyer 4) and a chance to provide bail. 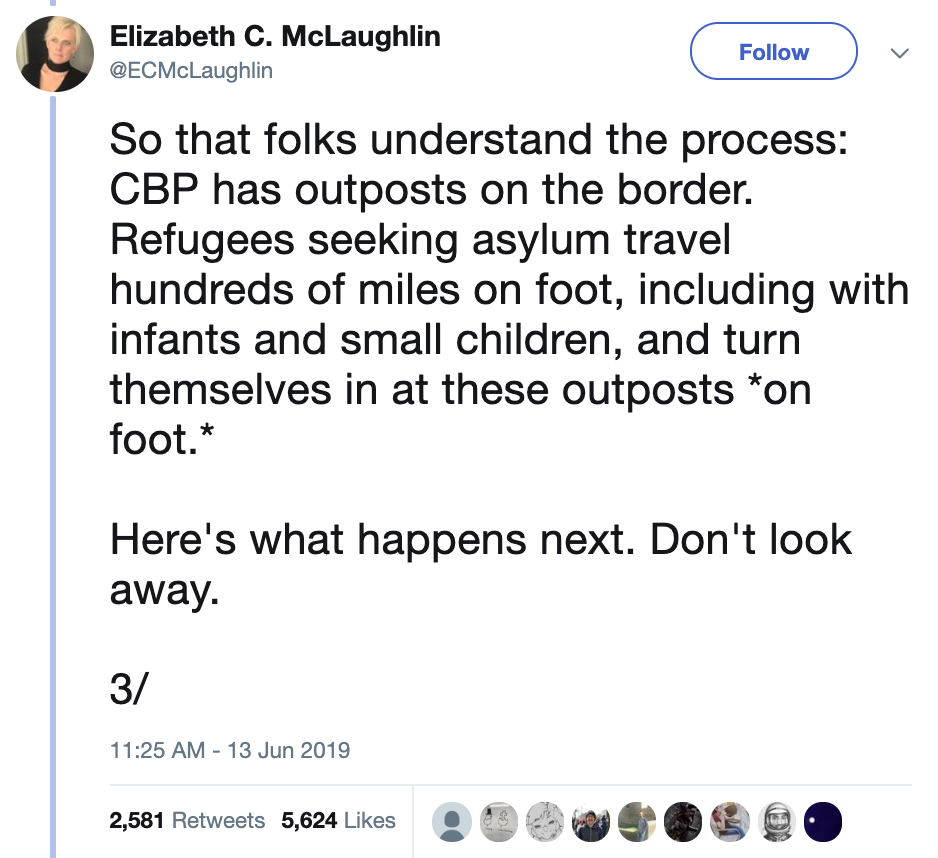 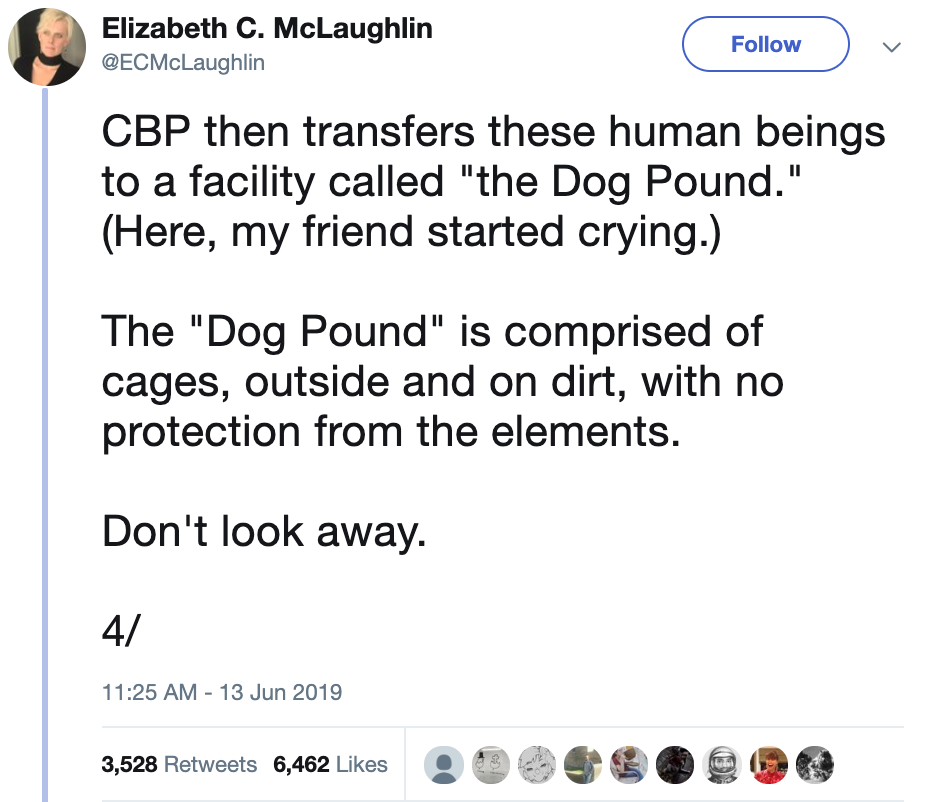 Contrary to what Donald Trump has said, it isn’t “gang members, criminals, drug dealers, and rapists” in these cages—it is families, children, teenage moms, all who endure conditions that would be deemed unfit for actual dogs. 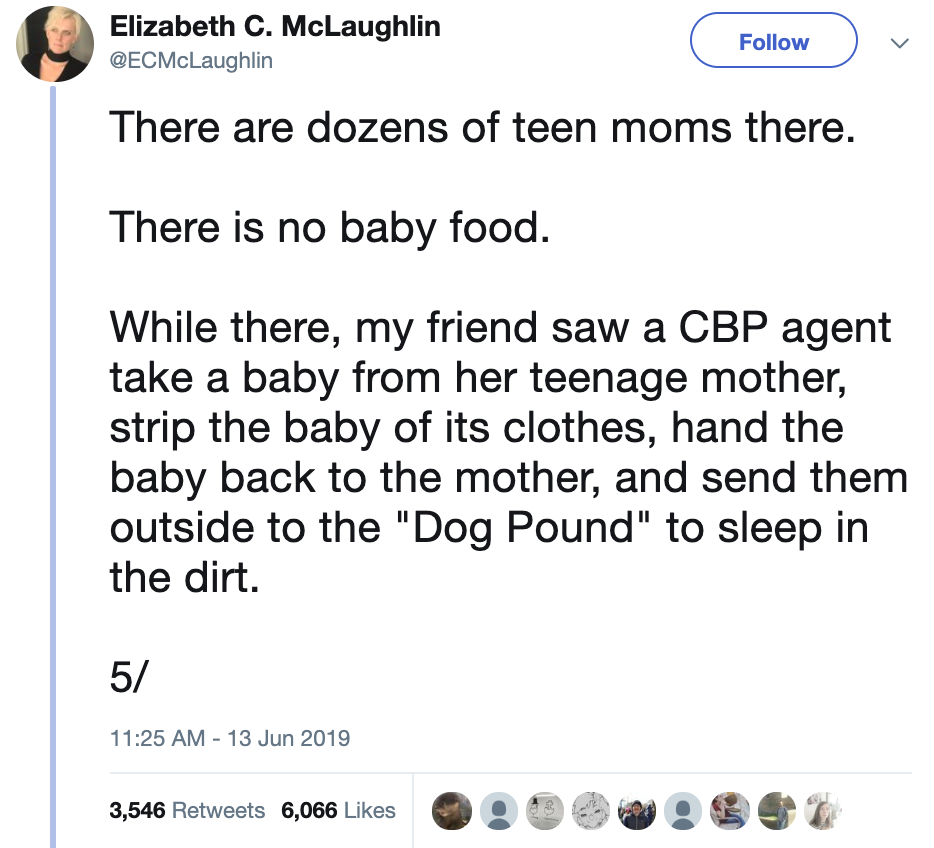 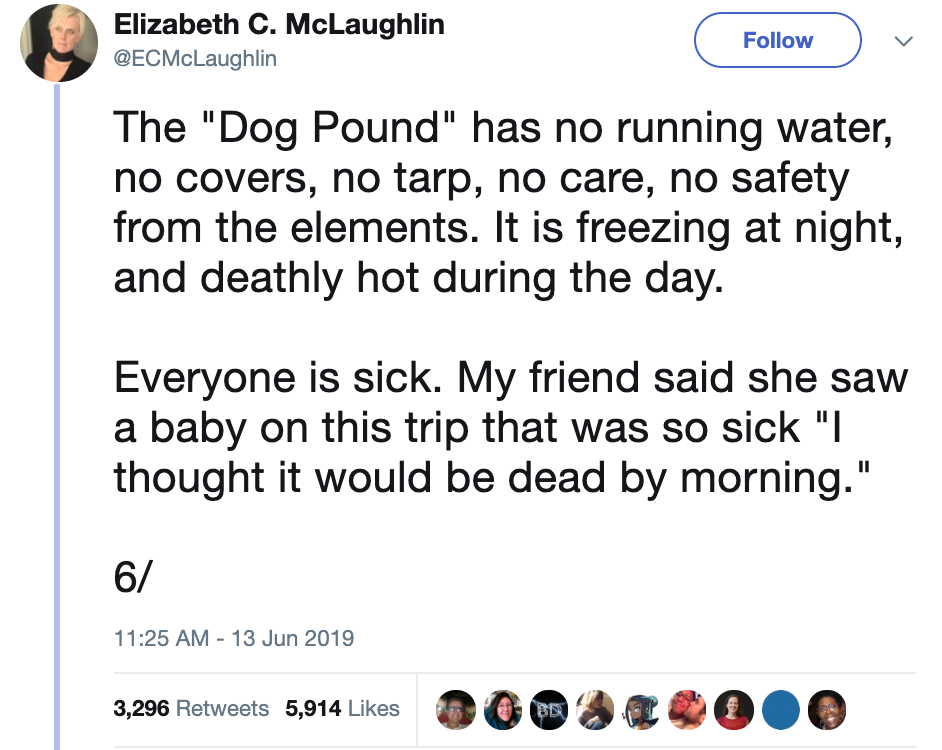 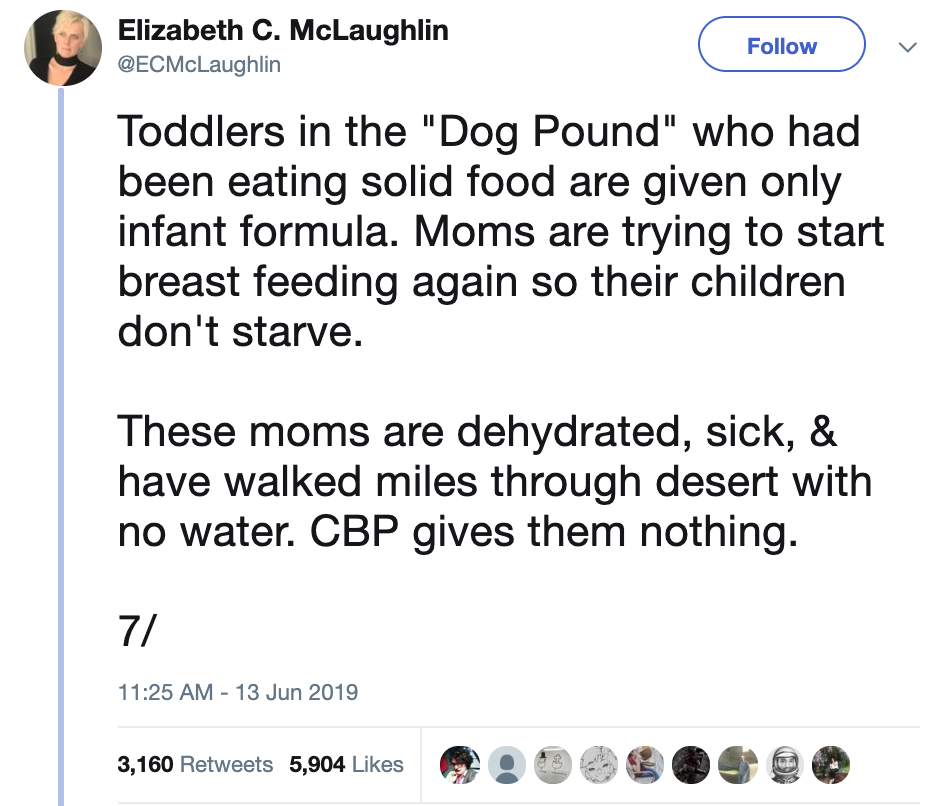 But, as McLaughlin so painfully details, the horrors don’t stop with ‘the Dog Pound.’ Refugees are then moved to a facility deemed ‘The Freezer,’ which is kept at 55 degrees and includes “critically ill people, disabled people, sick children, teenage mothers with babies.” 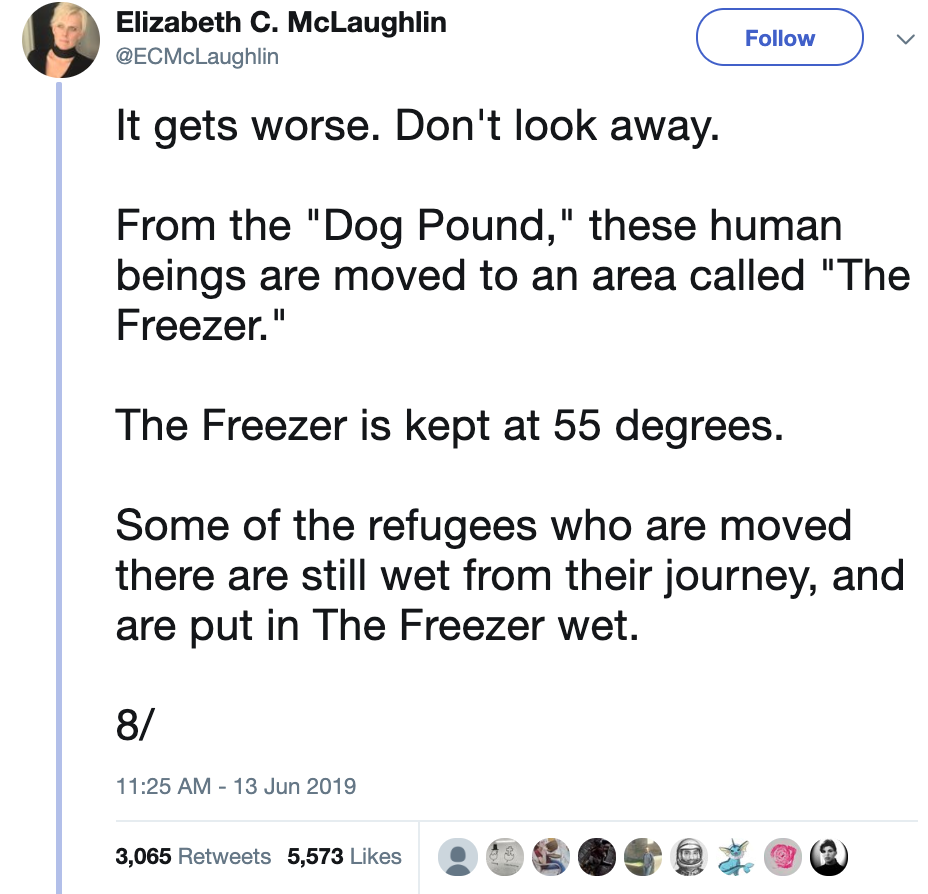 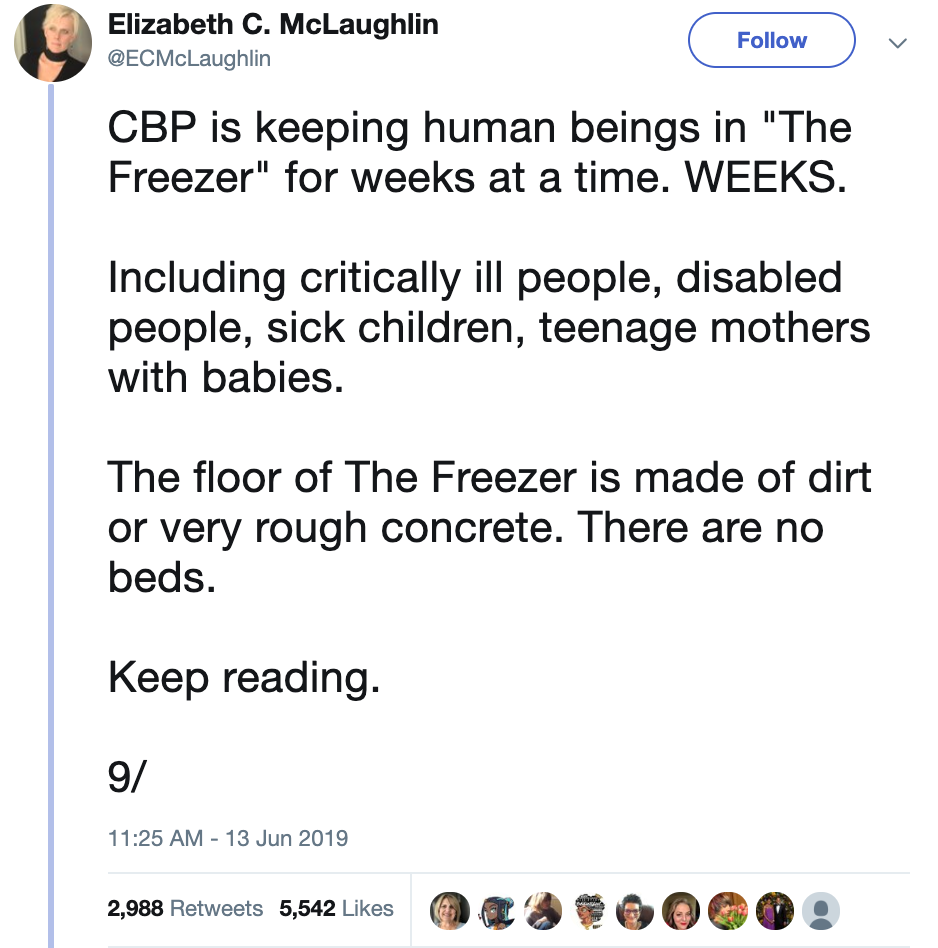 And while refugees had in the past been moved to ICE facilities with residential care, they are now being moved into military instillations such as Oklahoma’s Fort Still, which was used as an internment camp for Japanese-Americans in WWII. 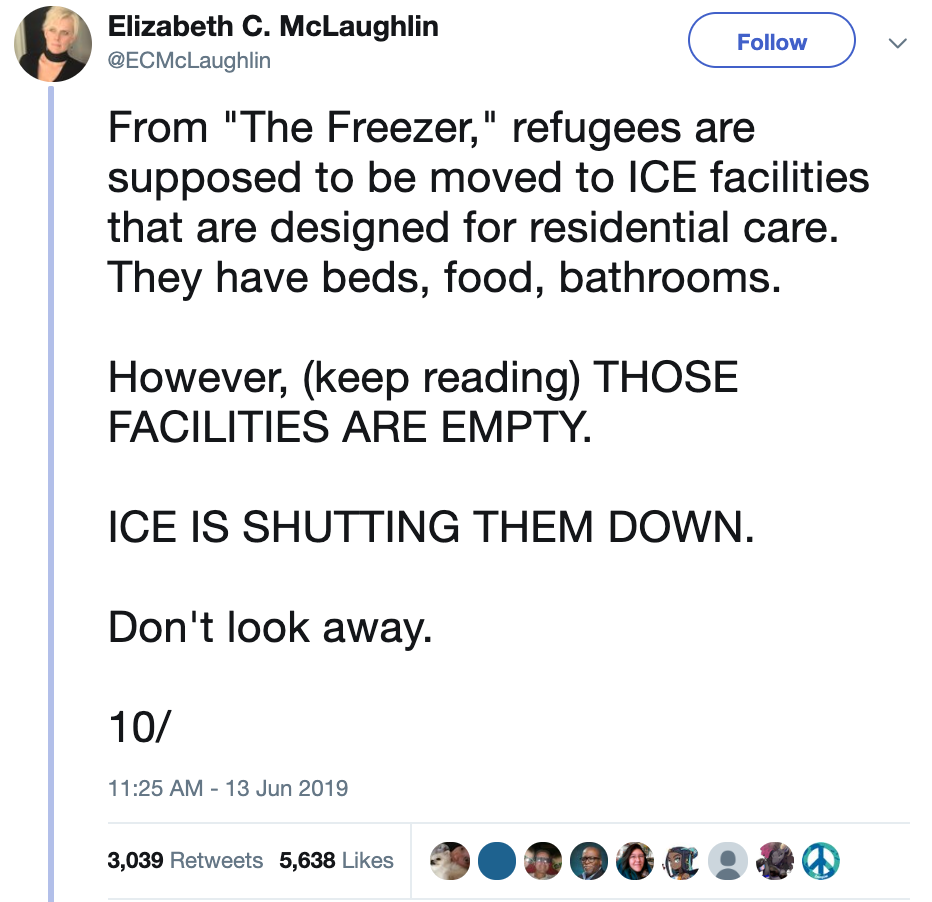 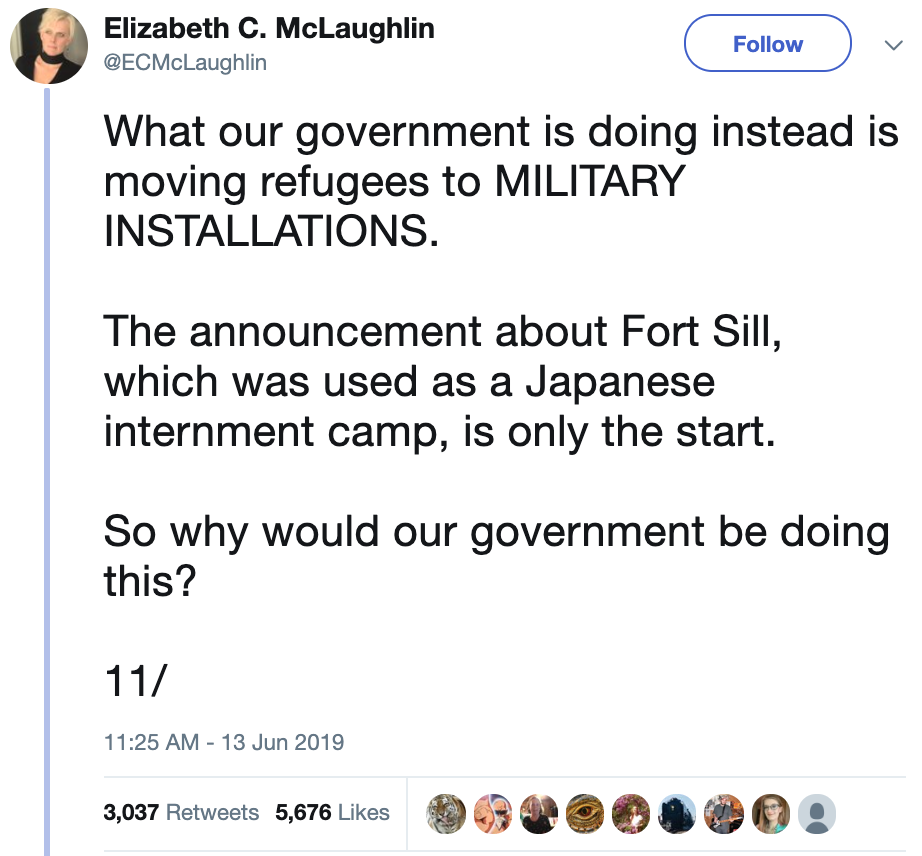 The government is doing this because “unlike ICE facilities, which allow site inspectors inside, there will be no inspection of military-run camps.” 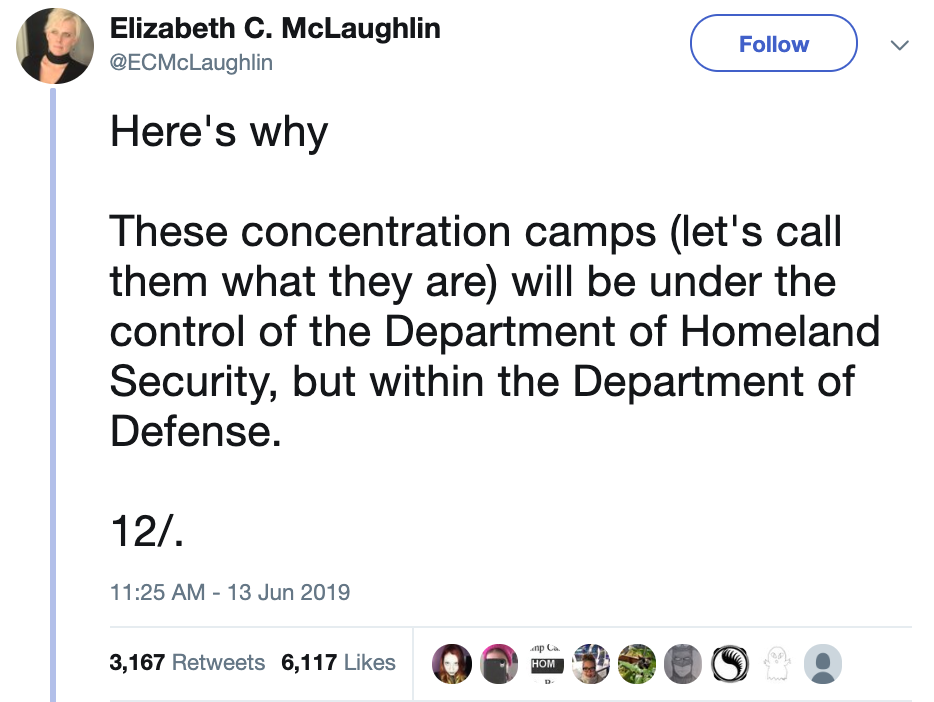 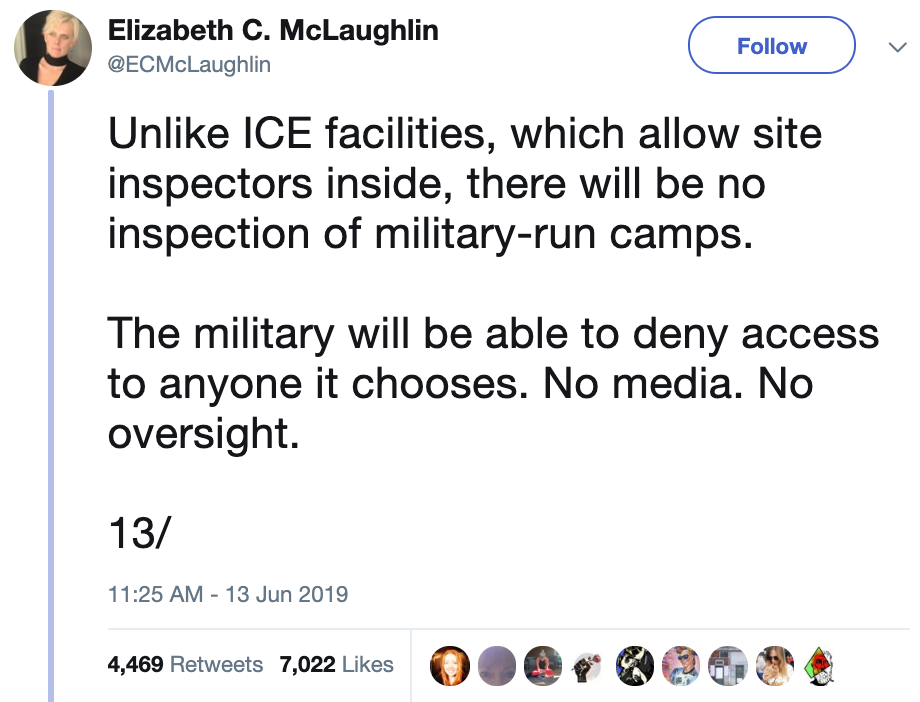 This means NOBODY is allowed in—not the press, not human rights advocates, not lawyers. 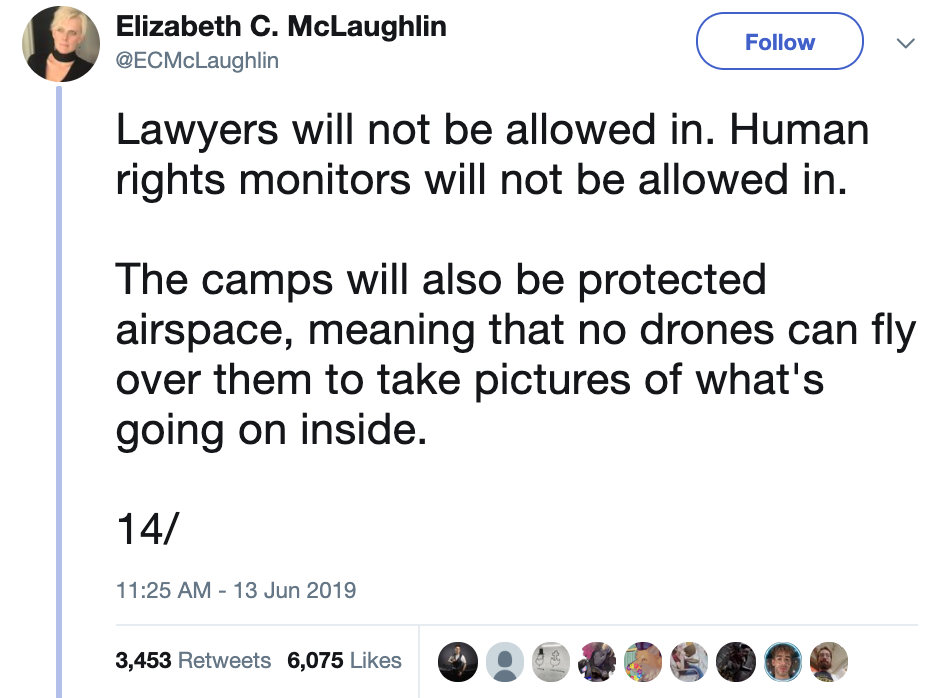 “The Trump administration will be able to conduct itself in whatever way it wants to without anyone knowing what’s going on inside,” McLaughlin writes. “Think about what that means. Think about why they would want that.” 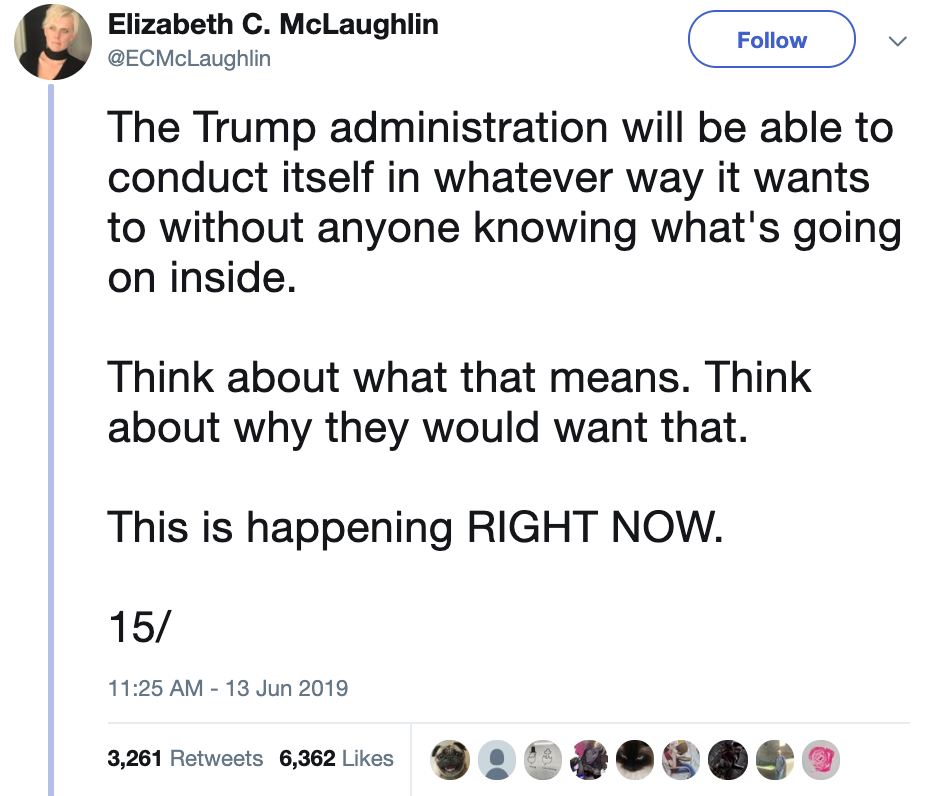 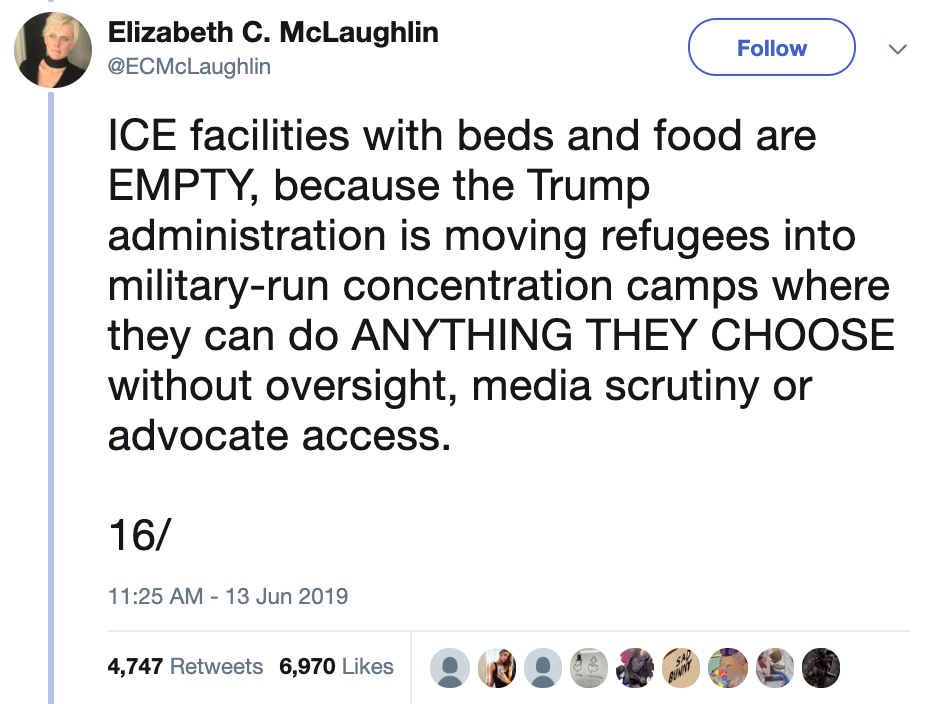 Is it any surprise to hear that Border Patrol agents refer these human beings as “bodies,” and that they are denied basic human necessities like food, shelter, and medicine? 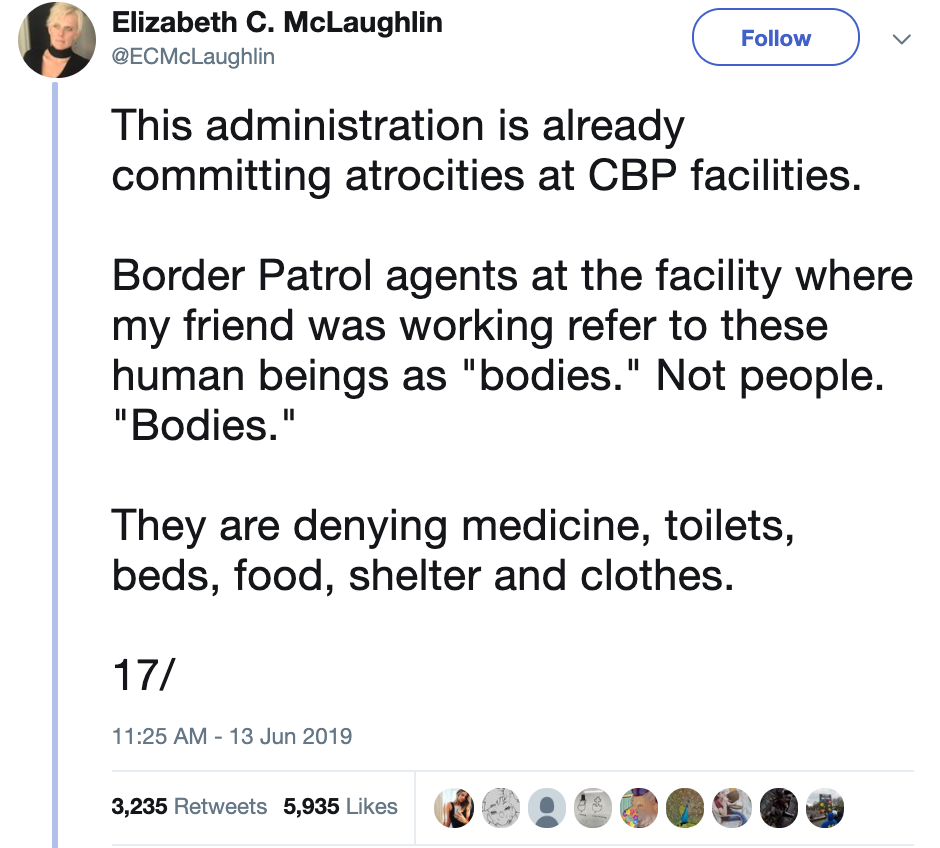 Let this sink in: “We’re days away from being met with ‘we’re not going to let you in, no matter what.'” 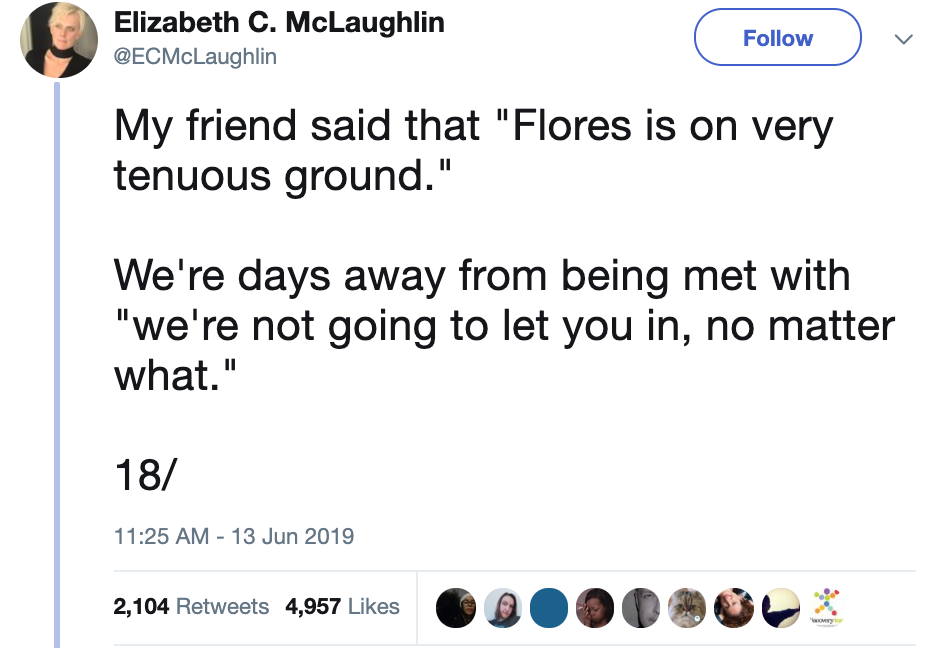 “What is coming is crimes against humanity,” writes McLaughlin. 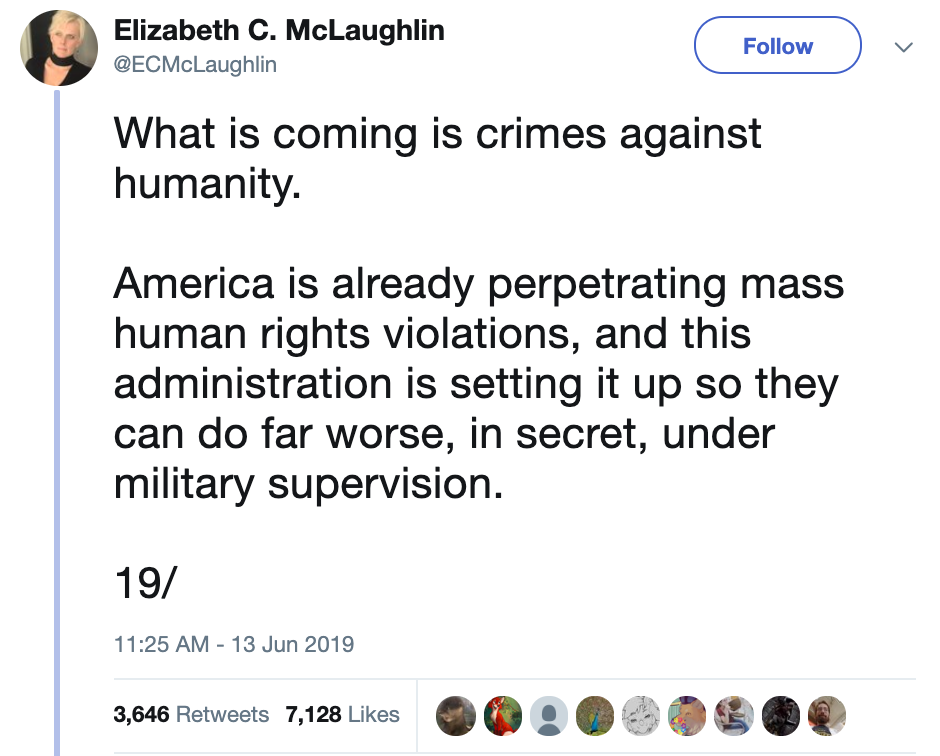 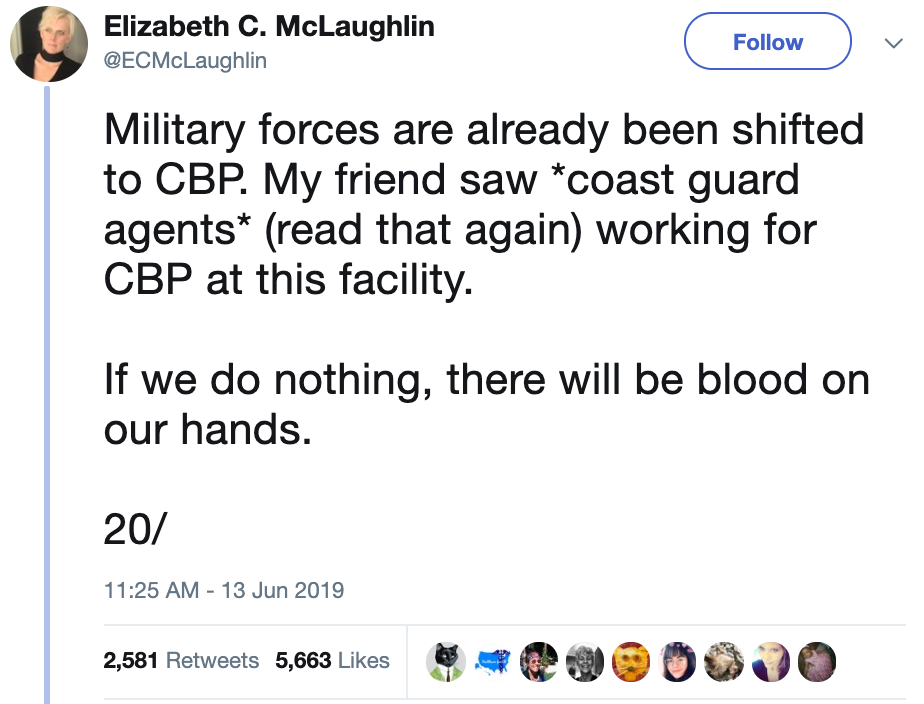 Along with sharing the thread to spread awareness, McLaughlin urges people to call House Speaker Nancy Pelosi to voice their outrage over the situation. 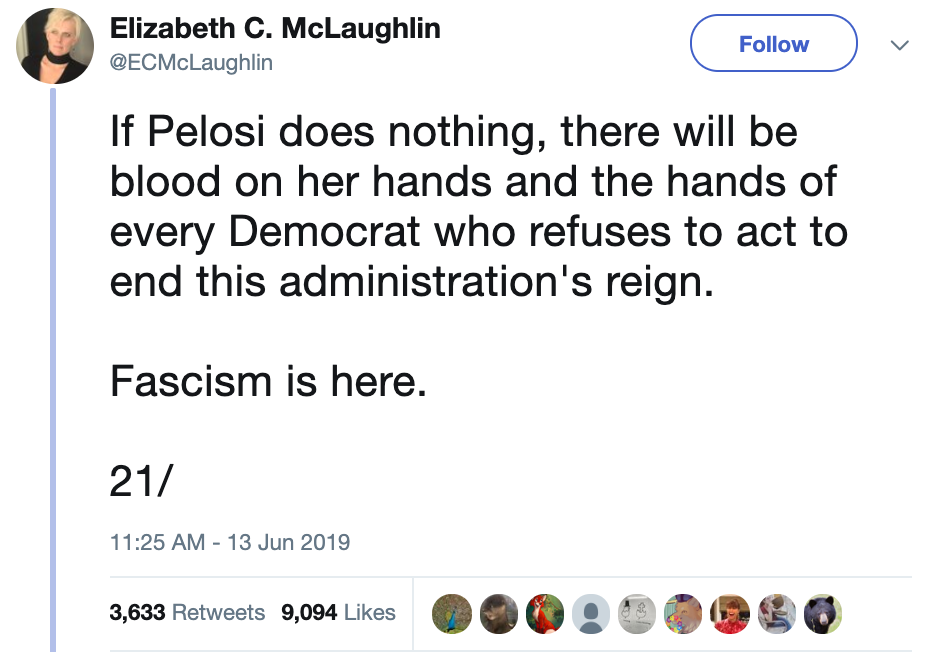 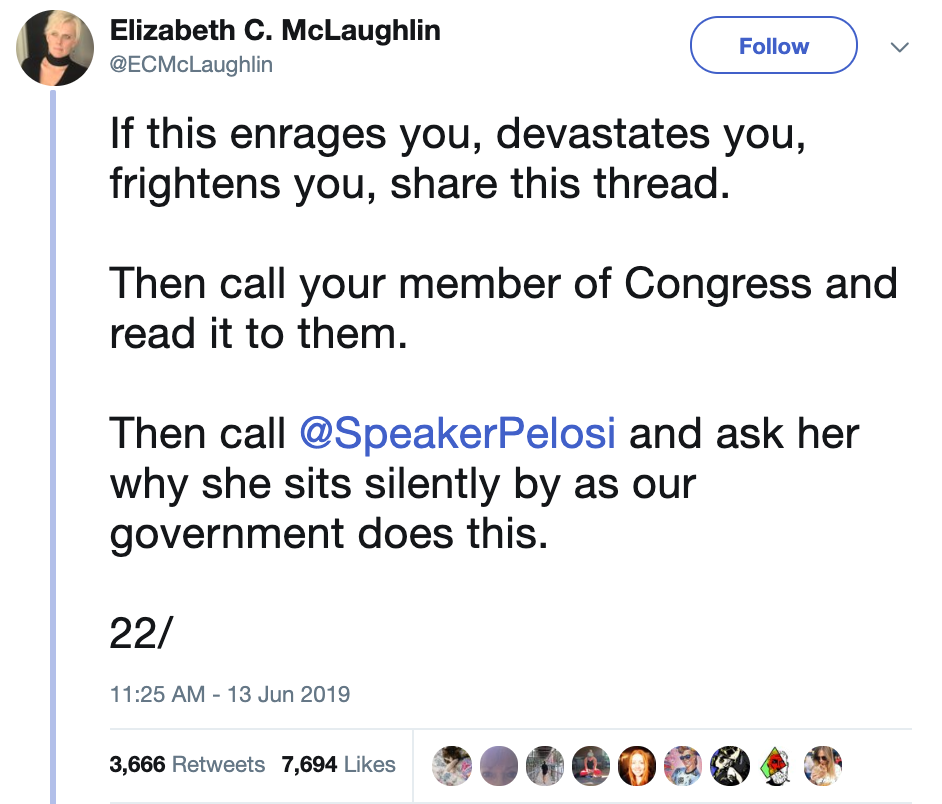 “We’re on a fast train to hell,” she writes. “There’s only way to stop it. Trump must be removed from power immediately, by any legal means, using every weapon in our arsenal.” 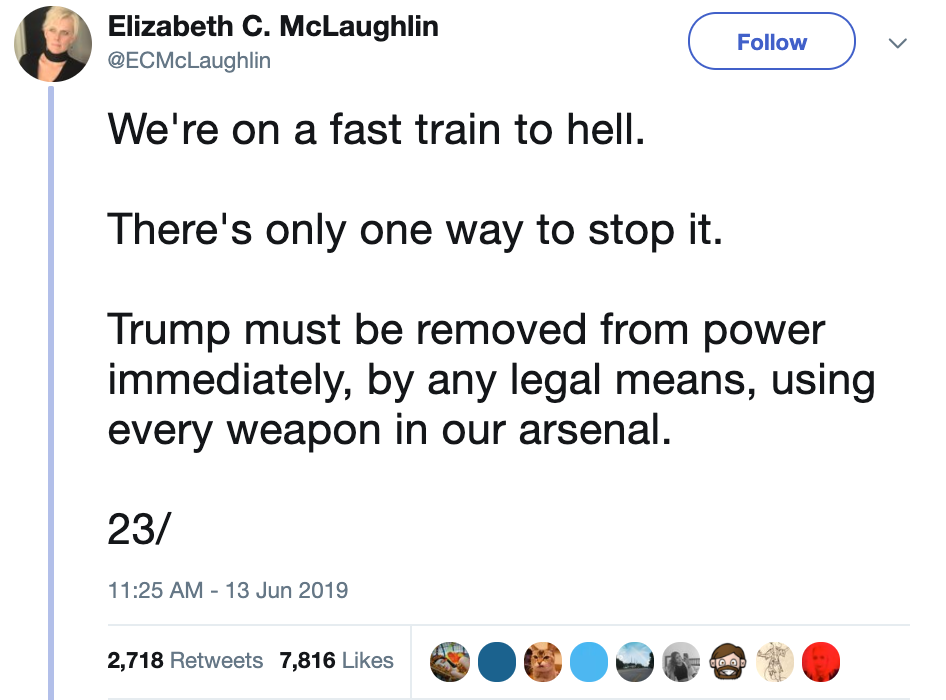 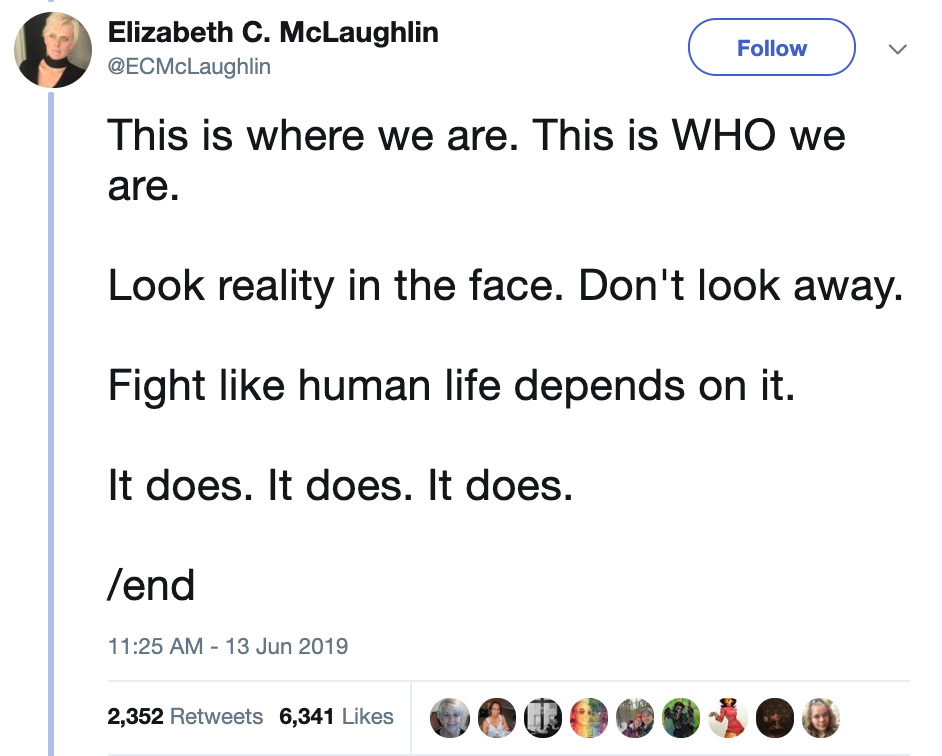 McLaughlin follows up her thread by tagging Congresswoman Alexandria Ocasio-Cortez, and encouraging others to tag their senators and to donate to RAICES Texas and the ACLU.

Last tweet: please donate to @RAICESTEXAS. Please do it immediately and as much as you can.

Please donate to the @ACLU.

Please fight against this administration with everything you’ve got.

To those of you asking: tag your reps, your Senators, tag anyone you want.

Every American needs to see what this administration is doing in our name.@HouseDemocrats need to ask themselves if they’ll sit idly by while America perpetrates atrocities.

She also notes that “Dog Pounds” and “Freezers” are not unique to one particular facility—they are common practice. This has been confirmed by Human Rights Watch.

Texas Monthly is covering similar conditions in this piece. My friend told me there are multiple "Dog Pounds" and "Freezers" at other CBP facilities than those my friend has been inside and this is common practice.https://t.co/0SeBgojM2c

Hello all. Thank you for continuing to share this thread.

I’ve compiled this flow chart to help everyday Americans understand the American camp system. This has been vetted by advocates at the border who have been inside these facilities.

If you are outraged over the Trump administration’s treatment of Mexican refugees, retweet McLaughlin’s thread. Call your senators. Call the UN. Donate to RAICES Texas and to the ACLU. And vote. Don’t trust the polls (remember in 2016, when they all said Hillary would win?) and get out there and VOTE.