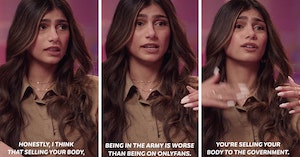 Mia Khalifa sparked some controversy after a conversation about selling your body to an audience on Showtime’s Ziwe.

The clip, from an episode that originally aired earlier this year, started making the rounds again after being shared to Ziwe’s TikTok at the start of the month.

It’s a thought-provoking topic, and one that’s been broached many times. But Mia seemed to reverse gear to examine the framing surrounding the question instead, insinuating that if we’re going to look at certain acts as “selling our bod[ies],” the scope needs to be broadened.

The military is a controversial topic, particularly in the United States, where our spending for war is out of control and many, in theory, support the troops with no critical examination of the greater context of the military’s existence, purpose, and impact.

“at least in the army you do something to society,” one viewer wrote.

Another claimed that “even if that’s considered selling bodies at least they have a damn purpose. And that purpose is literally saving lives and ending wars.”

Others took the time to actually think about what Mia was saying.

The full episode with Mia’s additional thoughts on the matter is available on Showtime.