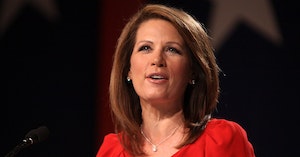 Another Republican climate change denier is pushing the old Bible story of Noah’s Ark to try and claim that climate change isn’t real or a threat to humanity. Michele Bachmann, former Minnesota congresswoman and founder of the House Tea Party Caucus, took things to a new level by publicly encouraging Christian leaders to use this story to convince their congregations that climate change is nothing to worry about.

Because the book that says the Earth is flat and the Sun can stand still tells her so. https://t.co/9YyOh3jMrE

Meanwhile, Japan is still recovering from the worst typhoon it’s seen in 60 years, with over 100,000 rescue workers scrambling to save people from the massive flooding that has already killed more than 70 individuals, with dozens more still missing.

Republicans like Bachmann apparently fail to realize that even if (or when) the ice caps melt completely, there will still be plenty of land that remains above water. However, climate change will still kill many millions of people, most of them the poorest in the world, and it won’t be just flooding that does it.

Of course, Bachmann also once said that Donald Trump is “the most biblical president I have ever seen.” No one’s taken her seriously as a political voice since she announced her “retirement” as a congresswoman in 2013 after she was subject to a full investigation by the House Ethics Committee due to her staff’s alleged misuse of funds.

They actually say there are a lot of different catastrophes that will happen if we don’t address climate change very soon, including mass droughts, wildfires, increasingly intense storms, famines, war, and pretty much every other Biblical horror you can think of.

Tell that to the people in coastal America and other nations that have been under water from floods.
Michele Bachmann: Climate Change is a ‘fraud’ because God promised Noah there’d be no more floods – https://t.co/WoBRQ7ptT7

God's little bellyacher Michele Bachmann offers as the proof that climate change is a fraud "the very covenant established by God and Noah. God says we will never be flooded.”

Which is why there hasn't been a flood in over four thousand years.

flooding is over (if you want it)