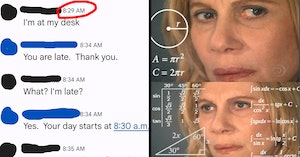 Sometimes it seems like the people in charge have nothing better to do with their time than nitpick workers below them. It certainly lends credence to the idea that those working in management do so because they’re incapable of doing meaningful work and have to be made to feel useful with utterly tedious tasks, but that doesn’t make it any less annoying for everyone who deals with them.

A recent post in the r/antiwork subreddit highlighted an atrocious example of just this, after a worker shared a screenshot of a virtual interaction they had with their boss.

Basically, the worker messaged their boss at 8:29am, per the timestamp, to say that they were at their desk. Five minutes later, the boss replied, “You are late. Thank you.”

They then clarified that the employee’s day is set to begin at 8:30am, as if being a couple minutes off is a moral failing or devastating to the company. However, the worker pointed out that they weren’t actually late, and have the timestamped conversation to prove it — the boss just responded late.

“Nope. You messaged me at 8:34am,” the micromanager responded. “I’m not going to argue.”

The Redditor was looking for advice on how to handle the situation moving forward, since it was apparent their boss had no interest in, well, provable facts.