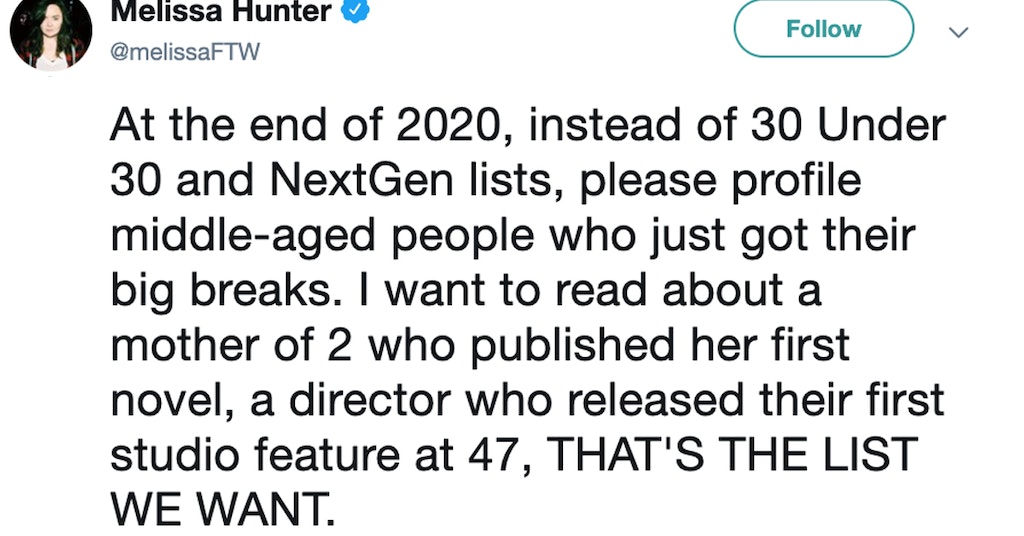 
Writer and TV producer Melissa Hunter went off on Twitter about a particular phenomenon which is seen a lot in media that covers people in the entertainment industry: 30 Under 30 lists. People are always being told about what an amazing 26-year-old has accomplished by their tender mid-twenties. These sorts of articles never ask how rich their parents are, but I digress.

Hunter is fairly young, but she’s also apparently sick of these sorts of stories. She tweeted to her followers, “At the end of 2020, instead of 30 Under 30 and NextGen lists, please profile middle-aged people who just got their big breaks. I want to read about a mother of 2 who published her first novel, a director who released their first studio feature at 47, THAT’S THE LIST WE WANT.”

At the end of 2020, instead of 30 Under 30 and NextGen lists, please profile middle-aged people who just got their big breaks. I want to read about a mother of 2 who published her first novel, a director who released their first studio feature at 47, THAT'S THE LIST WE WANT.

It’s a list a lot of people want, because Hunter’s tweet and the accompanying replies went viral, as folks shared all the things they’ve managed to accomplish since they turned thirty, in addition to raising their families. Even people who haven’t necessarily done things that are considered measurable markers of success have been all over the world, changed careers,  and found so many new and inspiring projects to light up their days. Life doesn’t end at 30, kids, if you’re very lucky.

Grandma of 4, 54 years young, Veteran, published my debut novel January 1st. My body is paralyzed from ALS, so I typed that shit with my eyes! pic.twitter.com/Whn1nBXgLz

I’m 41 and my first book comes out next week! The idea that you’ve got five years between 20 and 30 to do everything you’re ever going to do is ridiculous.

I changed careers in my mid 30s and made it to creative director this year in my late 40s.

all my life I want to be painter…I started to 5 years ego, I’m 65 …and I know I’m one 👇🏻self portrait and my granddaughters portrait pic.twitter.com/dtk0Ev6onS

I’m 41 and my first screenplay is premiering at @sundancefest this year in the US Dramatic Competition! #theeveninghourfilm

53 year old who took the stage in 2019 for a 4-week sold-out run of “Mamma Mia,” 10 months post-heart transplant. pic.twitter.com/VnykF4tQAF

My first book was published when I was 57, second, at 58, and now at age 60, working on revisions for book #3. Also, I didn’t start running until after I turned 45 (averaged 1,000 miles/year for several years.) #nevertoold #nevertoolate #nevergiveup #dreambig #workhard

Could not agree more ! I had my first book released & produced my first play (both successful) at the age of 40 – & I was offered lots of ‘be the face of’ writing & producing courses/programs for under 25’s – I asked if I could do it for over 40’s instead & they all said no!

I am a mother of four, I released my first full-length book at 45, and started law school this year—at 47—with four teenagers in the house. Some of us are late bloomers, but wow, when we figure it out…🔥

Workings on my doctorate. I had not taken a math class for 40 years but aced statistics and advance statistics with A’s. I will graduate with a 4.0 at the ripe age of 60+. The dissertation is all I have left. Lots of life to live!

I published my first novel at 51.
Still working on my first feature.
Starting w/a short (am 57.)

Melissa, former single mom here. Middle-aged if I get to live to 120. I’m 62. Random House will release my debut novel, “The Daughters of Erietown,” June 9. I dedicated it to my seven grandchildren. Here we go.

I made a “big break” for a baby impacted by the opioid crisis. He came to me at four months. After 903 days of waiting adoption finalized. He turns 3 later this month. I am 57. We have an absolute blast playing school buses and going to the Air & Space Museum. Age is nothing. 💗

I was 47 when I transitioned into HR and am now an HR Manager at age 50. First time in my life ever being a manager

I made my first film at 45, and have now made nine films of British fairytales. I earn a living as a harpist, but my great passion is for the tales and folklore rooted in the British landscape. My energy, vitality, and innate joy are far higher than in my 20s. Good times! 🙂 pic.twitter.com/cRxBiQMW1L

I’ve been working full time as a commercial illustrator going on 30 yrs but at 49 – I’m making my stride in the world of comics, games and novels. Which has always been my dream 😊👍🏾 pic.twitter.com/hg30FJ9rqR

At age 65 I ditched my corporate job to become a filmmaker…my first film, Beyond Sixty Project, is completed and we just finished a year of film festivals nationwide. It has been an exhilarating experience. There are so many stories of “older women” taking the leap!

Yes! My first full-length book in my field of work came out when I was 42, and my second one when I was 44. At 46, I’m hard at work on my third. There’s no reason our 40s can’t be our most productive and accomplished decade, or our 50s, or whenever. I’d love to see this list.

I didn’t publish anything, I’m just a regular human, but I went to Zimbabwe and volunteered at a wildlife refuge at 47, saw Victoria Falls. Life doesn’t just peter out after 30. My friend Elsa is 96 and went on an archaeological dig at 75. I want to be like her. pic.twitter.com/LAu8Pbhe7z

Aged 37 gave up my corporate career, realised #endometriosis meant I would never have a family, volunteered in Cambodia then Ethiopia and set up a charity to help end female genital cutting globally. I’m turning 50 next month and am looking forward to what the next decade brings!

My mom was sixty when she finally got became a therapist! It took her 13 years for grad school and practicum because of disabilities but she did it and she has her dream job now! And she STILL has big dreams like writing a book which I’m sure she’ll accomplish when she’s older

I am 48, two kids, and writing my 14th novel and working on a new TV show and working fulltime in a job that pays the bills. And I do my own housework and gardening, so yeah, it’s a lot.

What about a 50 yr old stage4 #metastaticbreastcancer patient who in last 7 yrs founded 2 websites, is a patient advocate, organizes exercise retreats for patients, created #sbcinfographic to make patients aware of signs & symptoms AND is a wife & mum to 2 children? @METUPUKorg pic.twitter.com/1LMTFjK0iI

Bought my first drum set at 49, published my first novel at 52. Waiting to get over my stage fright to join a band. 🥁🤘🤓📚

Finished my PhD at 41 with two teens as an Indigenous woman in public health. Finally got a tenure-track position after gig work in 2018 at age of 47. I’m an Associate Director & Assistant Prof with an academic book in the works on Indigenous Early Childhood