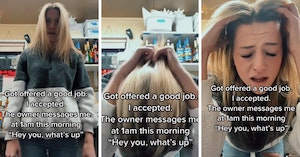 A TikToker’s video about a new job offer has viewers debating whether she’s overreacting or if she needs to get out of there ASAP.

A week ago, @fayymarie11 posted a simple video of her looking stressed out. A text overlay told the story: “Got offered a good job. I accepted. The owner messages me at 1am this morning ‘Hey you, what’s up.’”

While the TikToker herself didn’t explicitly ascribe any sort of meaning to the text, viewers soon filled in the blanks with their own assumptions.

“Maybe the job started at midnight and you were late for the first day,” joked @official…dad.

Another viewer suggested “he was hiring for a girlfriend position.”

Some thought the text may have been intended for someone else and sent by mistake, while others said that even if he meant to text his new employee at 1am, that doesn’t mean there was any creepy intent behind it.

But messaging employees in the middle of the night for no apparent reason is still weird, leaving at least one viewer calling it “first day on the job at the red flag factory.”

And a subsequent video suggested that this is just something this boss does, as @fayymarie11 did a duet with her original video but added “When he messages you at MIDNIGHT merry Christmas.”

The follow-up prompted some viewers to put the onus on the TikToker to tell him to cut it out.

“If you don’t correct him, you are condoning it and have no reason to act offended,” @v_mimi_r claimed.

“Y’all are really telling her she should take responsibility when this man, her boss, is the one acting outside his authority,” @gwenbrown097 challenged. “Y’all wild.”

While it’s not clear what the TikToker did about the actual texts, a video saying that the “job starts tomorrow” suggests she did go ahead and take it. So…good luck?