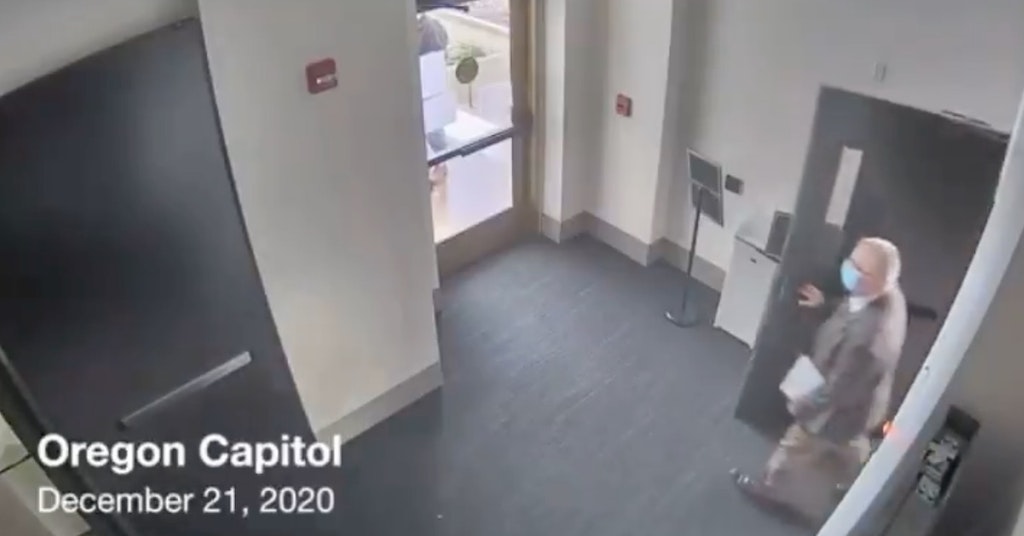 The Republican representative who was caught on video letting rioters into the Oregon Capitol back in December is actually facing charges for his short-sighted decision.

Lawmakers were meeting to discuss COVID relief for the state on December 21 when right-wing protestors pushed their way into the building, which had been closed to the public at that time. The state police tried to force them back, but rioters sprayed them with “some kind of chemical agent” and broke through glass to get into the building.

During all this, State Rep. Mike Nearman left the session and hurried out two doors, allowing two men who were clearly rioters to come into the building and prop the entrance open while they waved other rioters in. According to reports, Nearman then re-entered the building elsewhere.

The same security camera footage also shows state police realizing rioters had come in and forcing them back out the same door, as they violently resisted.

The footage first came to light back in January, and Nearman was repeatedly accused of purposely endangering his fellow lawmakers with his actions.

Despite proof that Nearman was involved coming out months ago, he has faced no consequences up to this point other than to be stripped of his committee assignments and incur a $2700 fine for damages.

Now, he faces a class A misdemeanor for official misconduct and a class C misdemeanor for criminal trespass. Additionally, Oregon House Majority Leader Barbara Smith Warner has requested that Nearman resign from office.

“Give today’s charges, it’s clear that he’s got to go,” she said. “I urge every one of my colleagues, in every caucus, to call this out for what it is and join me in demanding that Nearman resign immediately.”