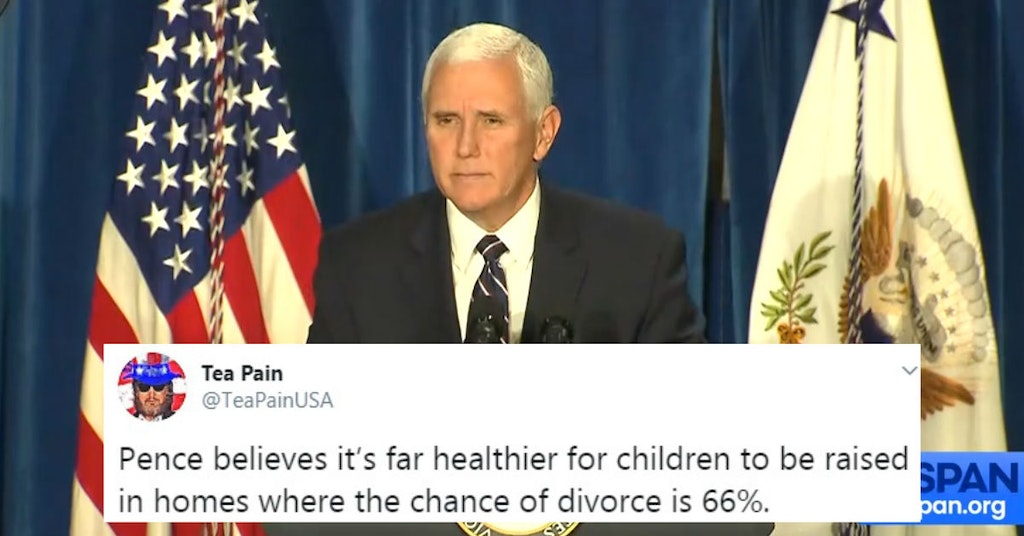 At a Department of Health and Human Services event celebrating National Adoption Month on Tuesday, Vice President Mike Pence praised a proposed Trump rule that would allow religious adoption agencies to refuse services to LGBTQ+ people, allowing for open homophobic discrimination. This, of course, would be under the guise of “freedom of religion.”

“We’ve reversed the rule implemented in the closing days of the last administration that jeopardized the ability of faith-based providers to serve those in need by penalizing them for their deeply held religious beliefs,” Pence said. “We will stand for the freedom of religion and we will stand with faith-based organizations to support adoption.”

He then said he “couldn’t be more proud” of these discriminatory actions, according to NBC News. Meanwhile, over 100,000 kids are currently in the foster care system hoping to be adopted.

As proud as Pence is about these attempts to keep more kids in foster care via homophobia, he sure doesn’t seem to want people to know about it. According to NBC reporter Tim Fitzsimons, his office called asking for the article on his speech to be changed.

I just received a call from @VP's office requesting this article be changed. Problem is: everything I reported is accurate. Make sure you don't miss it! https://t.co/MsIeUhZVYw

LGBTQ+ people could teach him what pride is.

Before he left office, former President Barack Obama expanded nondiscrimination rules that apply to adoption agencies to include LGBTQ+ people to solve the issue of Christian organizations refusing to allow same-sex couples to adopt. Trump’s proposed rule, which would reverse this, has been praised by homophobic hate groups such as the Family Research Council.

Multiple studies have found that same-sex couples are as good if not better at parenting than straight couples, and they are more likely to adopt as they are often unable to conceive together on their own. However, Mike Pence would rather kids stay in group homes or foster care than be adopted into a loving family if part of that family is gay.

Quite a lot of people are less than proud of their vice president right now.

What is WRONG WITH HIM? https://t.co/oGSzN8T6tM

Pence believes it’s far healthier for children to be raised in homes where the chance of divorce is 66%. https://t.co/g9kHukUIhu

2…statement in the Bible about denying adoption, not selling cakes, not doing business with gays. It is an excuse for discrimination by people like @VP who dont give a damn about or don’t know what is in the Bible, but just make garbage up cause they use Christianity to hate…

It almost makes you not want to remove Trump from office. Almost.