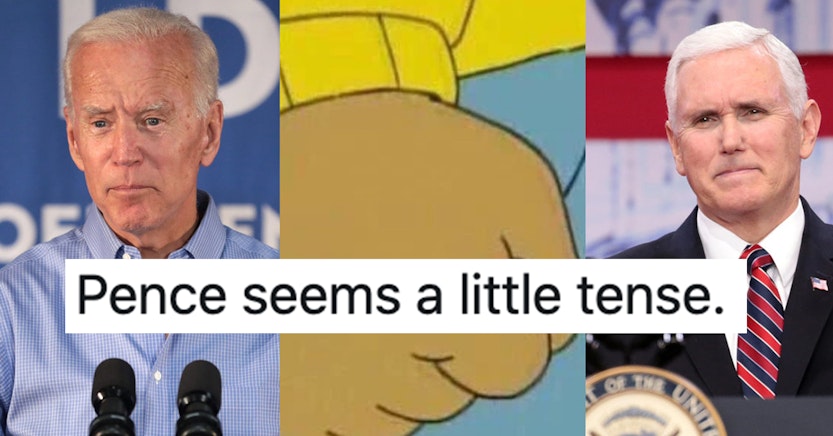 A series of photos of presidential candidate Joe Biden and Vice President Mike Pence meeting one another at the 9/11 memorial in New York City has been circulating on social media — but all may not be as it seems.

Most of the pictures appear to show some sort of congenial greeting between the two political rivals, even getting captioned with overly sentimental nonsense about how we need “more of this.”

Do we really need more hang outs with homophobes? Some may debate, but I’m squarely on the side of “nah.” And while Biden seems as if he’s being friendly enough despite Pence’s aggressively awful leanings, some of the other photos from that moment show that Pence may not have been quite as thrilled.

People couldn’t help but notice that the Vice President looked a little uptight about the encounter.

While it’s possible Pence was just gearing up to meet Biden in this pandemic friendly arm bump they were seen doing in the other picture, tightly clenching your fist prior to bringing your arm up in such a greeting doesn’t exactly seem like the normal trajectory for that movement.

Plus, accounts of the interaction have Biden as the one approaching Pence, so it’s entirely plausible the VP would have rather avoided it all together.

And regardless, Pence’s clenched fist is far too reminiscent of the iconic Arthur fist.

The close-up shot of everyone’s favorite cartoon aardvark has become a widely used indication of anger and frustration.

Though others had their own interpretations of the image.

Well, at least it didn’t end in a fist fight. That seems about where the bar for relations between Republicans and Democrats is currently at in the United States.