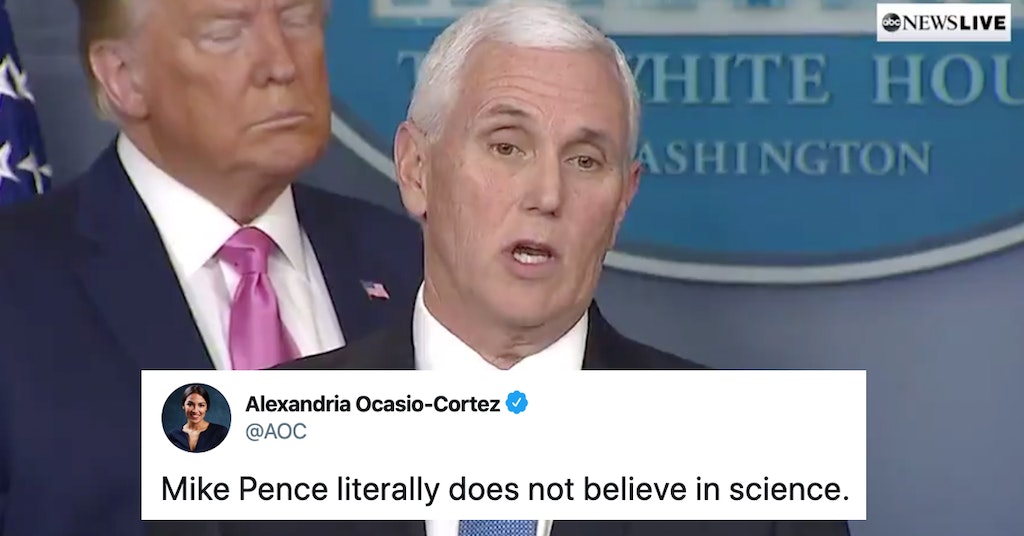 When we think of President Trump doing anything, saying anything, tweeting anything, or getting near anything of any level of importance to the human race or the planet (so, everything) we quiver in both fear and confusion and profound sorrow. But Mike Pence, his godly VP? That’s another story. He’s not quite as vocally belligerent, sure, but that doesn’t mean he’s not equally as vile or ignorant.

So when we found out that Mike Pence—conversion therapy enthusiast, climate change doubter, condom naysayer, theory of intelligent design-espousing, and “smoking doesn’t kill” believer—would be leading the U.S. into the fight against COVID-19 (Coronavirus), we all recoiled in collective horror.

This is the guy who, as governor in Indiana, presided over an HIV and Hep C outbreak because he couldn’t wrap his tiny mind around the importance of needle exchange programs. THAT is who is in charge of keeping Americans healthy.

And the American people are having none of it. From the hilarious to the outraged, here’s what people are saying, like Alexandra Ocasio-Cortez (we #stan), who calls the move “utterly irresponsible.”

Mike Pence literally does not believe in science.

It is utterly irresponsible to put him in charge of US coronavirus response as the world sits on the cusp of a pandemic.

This decision could cost people their lives. Pence’s past decisions already have. https://t.co/NhMPOusOWm

As governor, Pence’s science denial contributed to one of the worst HIV outbreaks in Indiana’s history.

He is not a medical doctor. He is not a health expert. He is not qualified nor positioned in any way to protect our public health.
https://t.co/1jVY44p2HF

ALL of the below is very, very true:

This a going to go very badly, my beloved AOC. Pence? A PANDEMIC?

Putting Mike Pence in charge of the coronavirus is like having Casey Anthony watch your kids.

Or like having:
Betsy DeVos in charge of Education
Bill Barr as AG
Steve Mnuchin for Treasury
Stephen Miller for Immigration
Ben Carson for HUD
Mike Pompeo for State Dept
Andrew Wheeler in charge of EPA
David Bernhardt in charge of Interior
The list goes on…

Waiting until Pence starts his “Pray Away the Death” initiative. #Pencedemic

Guess #Trump wants a scapegoat, #Pence, AKA Mr AIDS, to take the fall just in case the #Coronavirus becomes uncontainable. Anyone who watched #Trump throwing paper towels at suffering #PuertoRicans after #Maria knows he’s uniquely and utterly useless during any kind of crisis.

Here’s a thought worth considering:

Sadly, I believe Trump picked Pence to manage the coronavirus response NOT because he is competent, but because Trump wants to have someone to blame it on if things do not go well. He would then pick another running mate and blame Pence.

Pence, at corona virus press conference, wiped his nose with his hands then proceeded to shake everyone’s hands.

This ‘health expert’, who wanted to "pray away" a HIV epidemic, will now oversee the response…#COVID19 #COVIDー19 #coronavirus pic.twitter.com/ofPI7kcViz

Science-denier Mike Pence put in charge of US response to Coronavirus outbreak: What could POSSIBLY go wrong? 🧐

At least it wasn’t Ivanka?

I thought he was actually going to put Ivanka in charge or research on coronavirus so … pic.twitter.com/O7PVnTNcPO