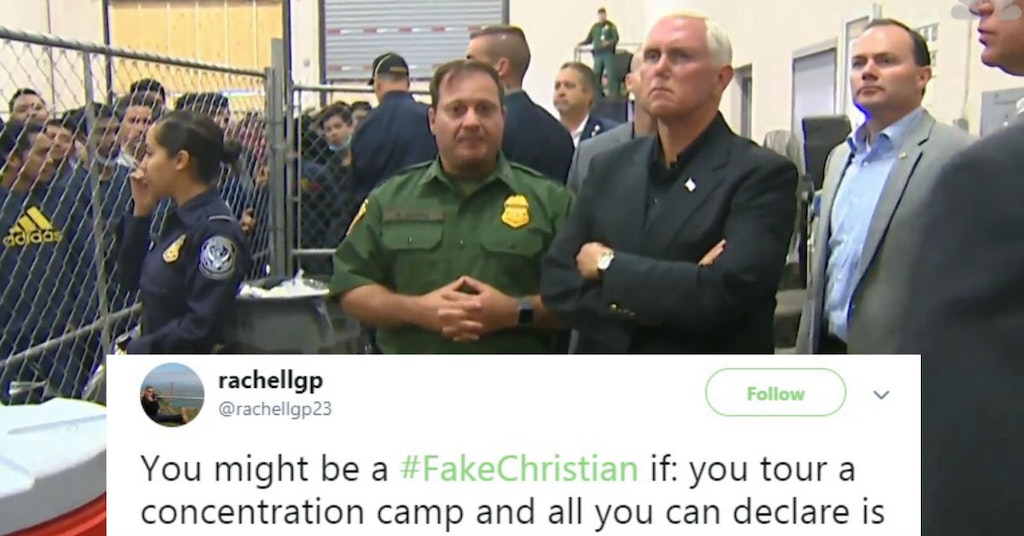 
Mike Pence’s cold appearance during a visit to the McAllen Border Patrol Station in Texas on Friday and his inaction other than blaming Democrats for something his President created resulted in #FakeChristian trending on Twitter. The Vice President was described as “stiff, uncomfortable and almost angry” in the video showing him surveying the overcrowded facility that kept hundreds of men behind a chain-link fence.

“While we hear some Democrats in Washington, D.C., referring to U.S. Customs and Border facilities as ‘concentration camps,’ what we saw today was a facility that is providing care that every American would be proud of,” he said according to a New York Times transcript.

He said this somehow at almost the same time he knew the system was “overwhelmed” and blamed Democrats for not giving more money to Customs and Border Patrol even though they literally just did.

Pence’s demeanor in the video and his inaction other than finger-pointing in the face of so much human suffering resulted in so many people calling him a fake Christian that it became a trending hashtag.

Mike Pence has used his supposed Christian beliefs to advance his political career, during which he used the same beliefs to attack LGBTQ+ rights as governor of Indiana and refuse to be alone with women other than his wife – something which unfortunately appears to be spreading. However, people who actually know anything about the teachings of Jesus have something to say after Friday’s national disgrace.

So you're going to pretend this is ok? What's wrong with you, shame on you, you're nothing but a #FakeChristian & #RacistVP pic.twitter.com/3zVREPaH0b

PSALM 69:33
The Lord hears the needy and does not despise his captive people. #FakeChristian pic.twitter.com/38LLmvuj6q

The look of discomfort on @VP 's face comes from the physical exertion of resisting the Holy Spirit convicting his heart for the sins he is willfully ignoring. The epitome of a #FakeChristian pic.twitter.com/aoWXEmFDg8

It's #fakechristian Pence's showboating that is dishonest. He won't even look at the detainees. What would Jesus do. SICK!
Pence Defends Conditions at Migrant Detention Centers in Texas https://t.co/EBfY8DAlFQ

Video shows Mike Pence ‘callously’ turning back on caged migrants while touring border detention centres – One person said: 'I saw not a single shred of pity or empathy in that empty man’s eyes' @vp #FakeChristian https://t.co/4HmtbgnG2x

#FakeChristian Your definition of faith would believe that interring Japanese Americans was Ok too. Innocents should never be treated inhumanely. APPALLING! pic.twitter.com/EB10DR7Ezx

@VP #FakeChristian Leviticus 19:33,34 – “When a foreigner resides among you in your land, do not mistreat them. The foreigner residing among you must be treated as your native-born. Love them as yourself, foryou were foreigners in Egypt. I am the LORD your God.” pic.twitter.com/wVYbPySqwK

"Who you gonna believe… me or your lying eyes?"- Groucho Marx#FakeChristian https://t.co/gGOWiZylpn

Mike Pence: Did you enjoy Sunday service? Everyone: My momma said you’re a #FakeChristian and I don’t have to talk to you. pic.twitter.com/8STAozZxoT

"Depart from me, you cursed, into the everlasting fire…for…I was a stranger and you did not take Me in…" Matthew 25:41-43 #FakeChristian pic.twitter.com/XM5yNpVtJ1

#Pence not even looking at them.
Same video.
This man's face says everything.
And so does the @VP

No showers. Nowhere to sleep except on concrete in shifts because there are almost 400 to a space in 90* heat.

Jesus would have whipped the stuffing out of Mike Pence and Donald Trump, honestly.