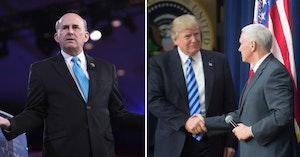 It’s the final countdown to Joe Biden officially being declared the winner of the 2020 election by congress and Republicans have pulled out a Hail Mary in (what we hope will be) the last last-ditch attempt to overturn the results.

According to The Hill legal affairs reporter John Kruzel, Representative Louie Gohmert and 11 other Republicans have filed a lawsuit somehow against Vice President Mike Pence and also trying to give him the power to hand the win to Trump.

“VP Pence has been sued by Rep. Louie Gohmert (R-Tex.), Kelli Ward and other GOP mbrs in a far-fetched bid to overturn Biden’s win,” Kruzel tweeted. “Plaintiffs ask Judge Jeremy Kernodle, a Trump-appt’d fed judge in Texas, to find that Pence is authorized to pick pro-Trump electors on Jan. 6.”

Normally, in January after a presidential election year, Congress would get together in a largely ceremonial counting of the Electoral College votes and declare the next president with the vice president presiding over the affair. This process was outlined in the Electoral Count Act of 1887.

What 12 of today’s Republicans are doing is asking a federal judge to ignore that law and just hand the outgoing vice president power to “effectively overturn Trump’s defeat,” according to Kruzel.

Considering the courts’ reluctance so far to indulge the Trump campaign or its supporters in left-field lawsuits like this, it seems very unlikely that any judge will let this one through, especially since it seems so blatantly unconstitutional.

“The idea that the Vice President has sole authority to determine whether or not to count electoral votes submitted by a state, or which of competing submissions to count, is inconsistent with a proper understanding of the Constitution,” Ohio State University law professor Edward Foley told The Hill.

Multiple commenters on this development have already dismissed this lawsuit as a circus act. Others are calling for Gohmert and other government workers involved in the suit to be unseated for attacking the U.S. Constitution in such a brazen manner.

Most, however, seem confident that the suit will go nowhere.

“Looking forward to this being denied on standing (the judge will have so many standing arguments to choose from!) within 72 hours,” wrote popular anti-Trump Twitter user Pé. “There is no actual controversy: the Trump electors from PA, etc., aren’t and never will be certified by those states and there is no legitimate dispute over the winner of the election.”

“Unclear how a district court in TX has jurisdiction over VP’s congressional duty in DC.”