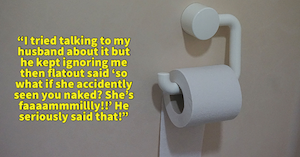 As a mom of two kids who lives in a small apartment, I have forgotten what bathroom privacy is like. But some people still relish the ability to be free while sitting on the toilet or washing their hair or tweezing their eyebrows!

One Redditor though, has recently lost that feeling of freedom. Her mother-in-law is staying with the family for a few weeks while getting home renovations. And while the OP is in the bathroom, her MIL has a curious knack of never knocking and always barging in on her. The OP can’t lock the door, but can’t the MIL knock? What is really going on here?

“So, my MIL (I’m a gal btw lol) came to stay with us for few weeks til her home is renovated for Christmas. The problem is that she has been randomly walking in on me while I’m in the bathroom. Thankfully not once has she seen me naked because I started picking up on her behavior after the second time in a week. She’d barge in, then turns and says ‘oh sorry’ then close the door. I tried talking to my husband about it but he kept ignoring me then flatout said ‘so what if she accidently seen you naked? She’s faaaammmillly!!’ He seriously said that!”

“We have a lock and I could’ve used it but I have past trauma from the idea of locking/being locked in a room after my brother locked me in the bathroom when I was 5. So I came up with this idea. I’d go inside the bathroom pretending to use it and wait for her to come (cause honestly? It’s deliberate at the this point). When she ‘accidentally” barges in she’d see me in a weird/awkward position. For example doing a ballet stand, standing on the toilet, or standing facing the wall with my hands up, (fully clothed of course). I could see how awkward and weird this would be for her because she’d stand there for few seconds trying to figure out what I was doing.”

“It was hilarious at first seeing her initial confusion but she told my husband about it claiming ‘she’s caught me practicing rituals in the bathroom.’ I cleared things up and revealed the reason why. My husband was livid. He called me childish and said that I made his mom feel ‘terrified/weirded out’ by my behavior. He said I should’ve acted maturely and locked the damn door instead of playing mind games.”

This is a chance to have a conversation! Sit down and tell your MIL to please knock first because you value your privacy and that her barging in upsets you! Hopefully she is not a creep and respects that!

“NTA. You went the funny way and that’s dope. Your husband, however, is an asshole. He expects YOU to be mature about it, but he doesn’t expect his mother to KNOCK ON THE F*CKING DOOR before walking in?” —

“Put a big old polish sausage in your pants and pull it out of the zipper. Stand in front of the toilet and wait. NTA, but definitely the GOAT for creativity dealing with MILs!” —

“I think MIL knows how to knock. This is a weird power play.” —

“It’s either dominance (your space is not yours), an issue with the door locking phobia, or nosiness about something about the DIL’s body. Not sure which. I would sit her down and ask.” —

“NTA. Who opens a closed bathroom door? Your mil is such an a**hole. This is the weirdest power play to continually walk in on you in the bathroom. Your next pose should be facing the door giving her two middle fingers.” —