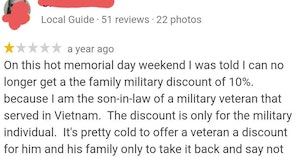 A Google review for Lowe’s has people calling out the customer’s odd entitlement.

A screenshot shared to the ChoosingBeggars subreddit reveals a disgruntled Lowe’s shopper at an undisclosed location. The man was livid after discovering that the company would no longer allow him to use a military discount that would give him 10% off.

Plenty of places offer some sort of discount to people in the military and veterans as a symbol of thanks and respect. Sometimes those benefits even extent to spouses.

But as it turns out, this man was neither.

“On this hot memorial day weekend I was told I can no longer get the family military discount of 10% because I am the son-in-law of a military veteran that served in Vietnam,” he wrote. “The discount is only for the military individual.”

The entitlement continued as the man called the change in policy “cold” and said that Lowe’s was proving they are “no longer thankful,” presumably for the great sacrifices this man made in marrying into a family where a relative was in the military several decades ago.

“Lowe’s, this is the last time you get my money. Maybe I was given the wrong information, but it sure seems Lowe’s could care less about the families of those who served this country with honor,” the review concluded.

Now, reddit has a whole forum dedicated to making fun of military spouses who feel entitled because of their partner’s service, so they certainly didn’t side with the son-in-law in this war against Lowe’s.

One reader did chime in to say that Lowe’s discount used to be extended to anyone living in the same house as a veteran, which makes sense if you all share shopping duties. But even they said they “didn’t pitch a fit like this reviewer” about the change.

Discounts are a nice gesture, but as u/aspen_silence said, they’re a privilege, not a right.