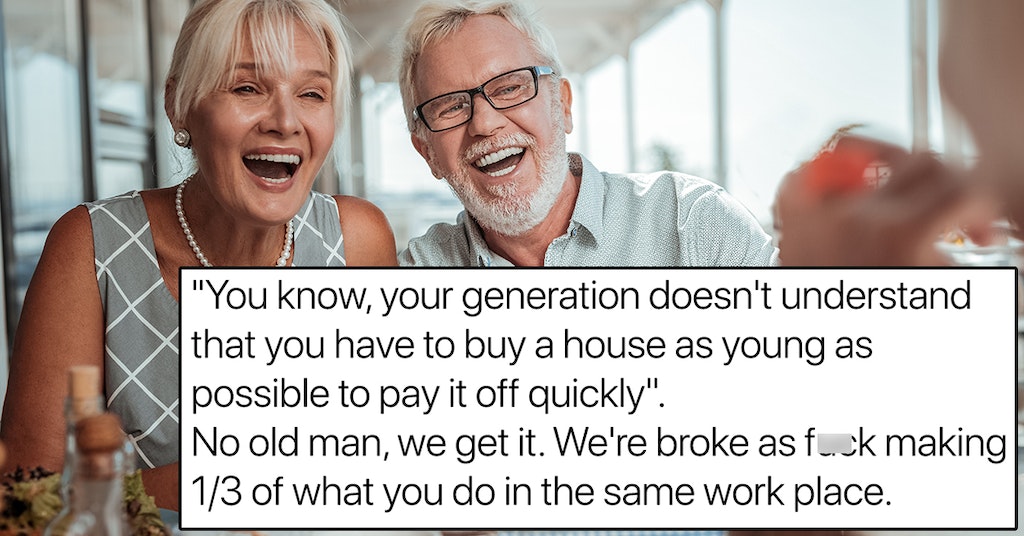 The enmity between millennials and boomers is pretty famous at this point because they can’t stop talking about each other. Boomers think all millennials are entitled losers and millennials think all boomers are out-of-touch jerks.

That means there was a lot of fodder for this Reddit thread started by user Nursejoysc-ntysister, who asked, “Millennials of Reddit: What’s the worst ‘Baby Boomer advice/wisdom’ you’ve ever been offered?”

A lot of the answers came from people complaining about their own parents, so they were pretty passionate. Some important themes were how anyone can get a job these days (hint: it doesn’t involve going from store to store in person) and buying houses on a minimum wage salary. The responses might get your blood boiling, but they could also be something to send to your own parents. You know, to help bridge the communication divide:

I was getting my masters degree and we had a guest lecturer come in. He had been CEO of a small company for many years. He basically told us that he stumbled into the job right out of college because he didn’t know what to do and gave it a shot. They gave him the assistant CEO position because he had been the assistant manager at a movie theater for a summer. And then 2 years later he became the CEO.

He was basically telling this entire glass of people getting their advance degrees in the hopes to get his position that he got his job on a whim 30 years ago. —dreamqueen9103

Talking to my dad recently, he was going on about “participation trophies.” When I pointed out that we wouldn’t have received said participation trophies had his generation not invented them, his response was: “Yep, that’s another problem with your generation. Always blaming your faults on other people.” —Anonymous

When I was in high school looking for a job my grandmother told me to just go to places and fill out applications; she told me it was useless using the Internet to look for a job. This was in 2008 and every place I checked for a job had an Internet-based application.

EDIT: No one seems to quite understand. You can argue going into a store or calling back is useful to being known or improving your chances at getting a job at some companies. That’s great. According to my grandmother, it was pointless to use the Internet as a means of finding available jobs. If I were to follow her advice I would go into countless places and ask if they were hiring there. —PM_ME_YOUR_HERO

My first retail job, any time I complained about customers or coworkers to my father I would get, “You just have to suck it up. It builds character, and you’ll always have something you don’t like about your job or coworkers.” A few years ago, he lost his help desk job, and nobody wanted to hire him on for an IT position when he’s just a couple years shy of retirement age and doesn’t have a degree. After a couple years of being unemployed, he realized the gig was up, and took a part time job working in a grocery store across the street from the one I had in high school.

Now, whenever I go to visit him, I always hear something like, “Can you believe this bitch, shikitohno? I just finished building a goddamn corn pyramid, has to be 7 feet tall, and she wants one from the center on the bottom, because she says she can tell those are the freshest. Can you believe it?” No, dad, not a clue at all what you’re talking about, but you’re character sure seems to be growing. —shikitohno

Sorry, mom, no grandkids until I have a job with a decent paycheck and less student debt. —NotReallyMaeWest

My friend’s dad got a fantastic job right out of college (with an unrelated bachelor’s degree) by LITERALLY GOING INTO A RANDOM BANK DOWNTOWN AND REFUSING TO LEAVE UNTIL THEY GAVE HIM A JOB.

Can you even imagine? Can you?? —effieokay

I guess I’m on the old side of the millennials, but I had numerous people tell me not to go into computer science and instead go into some other engineering field because computer scientists didn’t make good money, wasn’t a good job, not a good fit, etc. Glad I didn’t listen to any of them as I make a really good salary now. Why the heck would I take advice on entering a high tech field from people who can barely use a computer? —DrMonkeyLove

I was once told by a baby boomer “If you want a man to stay with you, you’ll have to pop out a baby” (or words of that effect). I told her straight up “Any man who would stay for our baby, but not for just me, isn’t a man who I’d want staying in the first place”.

For fucksakes, is it really that unusual for me to want to be loved for who I am, and not for my ability to procreate? Why would I want to stay with anyone who sees me as nothing but a human incubator? —Lil-Night

My boss recently told me my generation was entitled, and began quoting various articles on how we all think we’re special and exempt from criticism etc

AS I was shoveling a dead rat out of the doorway. —Fatherchristmassdad

My mother told me to, “Just get a job. Tons of places are hiring.”

Though, she has come to understand the struggle now as she spends all day applying to jobs and not getting a single call back. —bluepandadog

“You know, your generation doesn’t understand that you have to buy a house as young as possible to pay it off quickly”. No old man, we get it. We’re broke as fuck making 1/3 of what you do in the same work place. —Anonymous

I love being told “be grateful you /have/ a job!”

Then they look on in horror as I explain that I can’t afford to live on my own while working over 40 hours a week. I don’t get vacations. I don’t get sick days. I get absolutely no paid time off, even for shit like Christmas. No time to pursue things I enjoy, no money to see a doctor about my deteriorating jaw.

But it’s not their problem, you know? They get to walk away from the conversation. —meinsaft

Because that’s what someone can get fresh from college. —John0517

“You don’t deserve to make a livable wage at McDonalds, get a real job”

“What, are you too good to work at McDonalds? Grow up and stop being entitled and do what you gotta do.” —Cursethewind

Not really advice but my neighbor was complaining about how useless and lazy millennials are after I snowblowed their driveway today. Only, it used to be their snowblower. They misused it, broke it, and I fixed it, and I’ve been doing their driveway ever since. But whatever I’m just some lazy 20-something full time student with a job and enough time to turn wrenches in the garage. —BlindBeard

I graduated in 2007 and had an extremely difficult time finding a job. I was juggling 2 unpaid internships and a part-time job at a movie theater while applying to anything I could find. I spent my spare time interviewing at staffing companies that never called me back and trying not to slash my wrists.

My mother would toss the newspaper at me and said, “you know, I’ve never been unemployed, but I still read the WantAds every day.”

Thanks, Mom, that’s super helpful! You know what kind of jobs they advertise in the newspaper? Mostly construction jobs that I am completely unqualified for because I a) have no training and b) an built like a toothpick.

She refused to acknowledge that I was actively searching for a job and kept insisting that I was lazy. —Onefortheisland

“Just go to college even if you don’t know what you want to do.” —Anonymous

Temp agencies will get you sustainable work. Why are you looking online for jobs when there are temp agencies? —theelvishkilljoy

Naturally this exchange occured while I was working so I hid my “f0ck-off-and-die” face behind a polite smile and said I would consider it. —WickedGingah

“Go to graduate school. Then it’ll be easy to get a great job.” —jksbooth

“You’ll feel different when they’re your own children.”