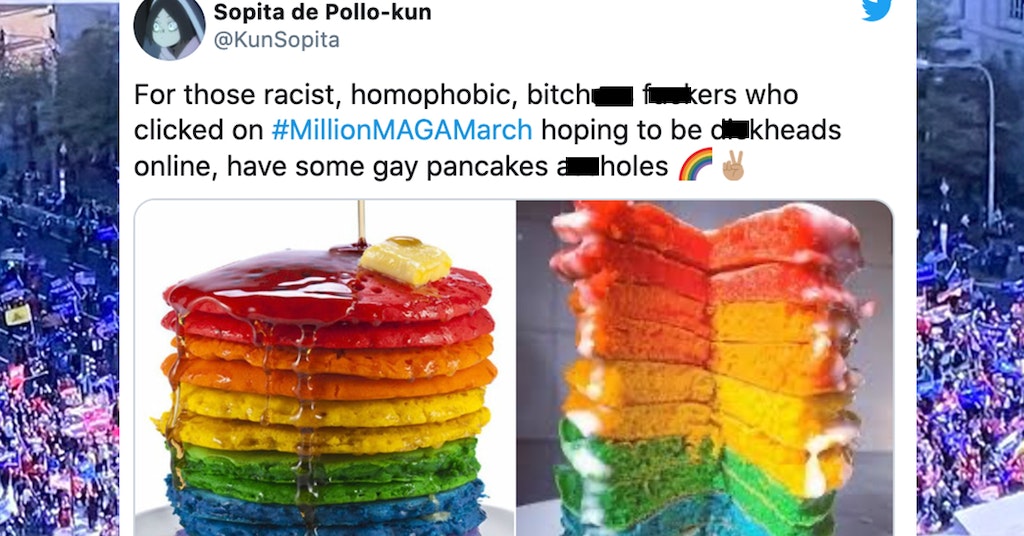 
While the underwhelming “Million MAGA March” (attended by somewhere around 10,000 people) flew under many people’s radars over the weekend, not everyone was going to let it slide.

Realizing that the best way to undermine the event would be to make it harder for them to organize and share through hashtags on social media, TikTokers flooded the #MillionMAGAMarch tag with pictures of pancakes on Friday and Saturday.

The trend seems to have been started by Shea Depmore, who posted a call to action on TikTok.

“I’ve seen many on this app rightfully warn people to stay away as these fools come strapped and they’re angry,” she said. “But I don’t want these Proud Boys to be proud, so here’s what we are gonna do. We are gonna hold a Pancake Beachez Million MAPA Brunch. That’s right: Make America Pancakes Again.”

Depmore encouraged people to make their own pancakes or dig up stock photos to flood #MillionMAGAMarch with pancake pics and “syrupy goodness,” and that’s exactly what happened.

All social media platforms that feature hashtags as a way to organize and collect similar posts saw an uptick in pancake pictures over Friday and Saturday as the word spread. Naturally, the K-pop stans got involved, too. And once the K-pop stans set their mind to do something, it’s over, folks.

Lest we ever forget, TikTok teens and K-pop stans were responsible for making Trump think his first mid-pandemic rally was going to have a massive turnout, after they organized and requested tons of free tickets that were never going to be used back in June.

Rather than anything nearing the one million ticket requests touted by campaign manager Brad Parscale, the rally saw a turnout of merely 6,200 people — roughly a third of the capacity of the arena it was held at.

And some people believe this hilarious turn of events contributed to Trump’s eventual insistence that he was going to ban TikTok from the United States entirely, though what actually wound up happening was more complicated and more shady.

It’s clear that TikTok teens and K-pop stans are a massive organizing force that Trump and his supporters stand no chance against, and it’s fascinating to see some who are too young to actually vote still find a way to engage in politics — even if it’s simply spamming MAGAs with pancakes. We all play our parts.