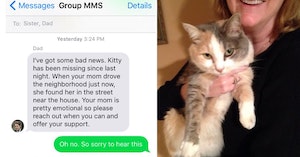 A man’s story of his family’s lost — and unexpectedly found — cat has gone viral for the absolutely WTFery of it all.

Eric Schmidt shared screenshots from a family text thread to Twitter earlier this week, in which his dad told him and his sister that their mother found her beloved cat “in the street” after she went missing the night before.

Dad described his wife as “pretty emotional” and a follow up from Eric’s sister echoed how broken up their mom was over losing her cat.

They did what anyone who loves their pets would do, and held a ceremony in the background to put dear Kitty to rest.

But Kitty, it seems, had different plans.

“After a beautiful burial service and words of remembrance from yours truly. We walked back in the house to begin our post-Kitty life,” Dad wrote a couple hours later. “Out of habit I looked out the back window and guess who was staring back at me?”

The whole family walked away from the situation understandably convinced they had buried someone else’s cat.

And while they could have left it at that and hoped another family found closure over their missing pet another way, Mom and Dad opted to do the right thing instead. They dug up the cat they buried and took it to the vet to check for a chip.

“It didn’t have a chip in it,” Mom wrote to Eric in a separate text the following day. “Because it’s a rabbit.”

“DO NOT tell the world about this,” she added.

Eric’s tweet was actually a retelling of a story that happened to his family five years ago, but that didn’t stop people from being floored by the entire narrative.

And it brought up other similar stories of animals that turned out not to be domesticated pets at all, or pets having returned home in strange ways.

It’s sure nice to read a story about a missing pet that actually has a happy ending — even if it had a couple crazy twists along the way.