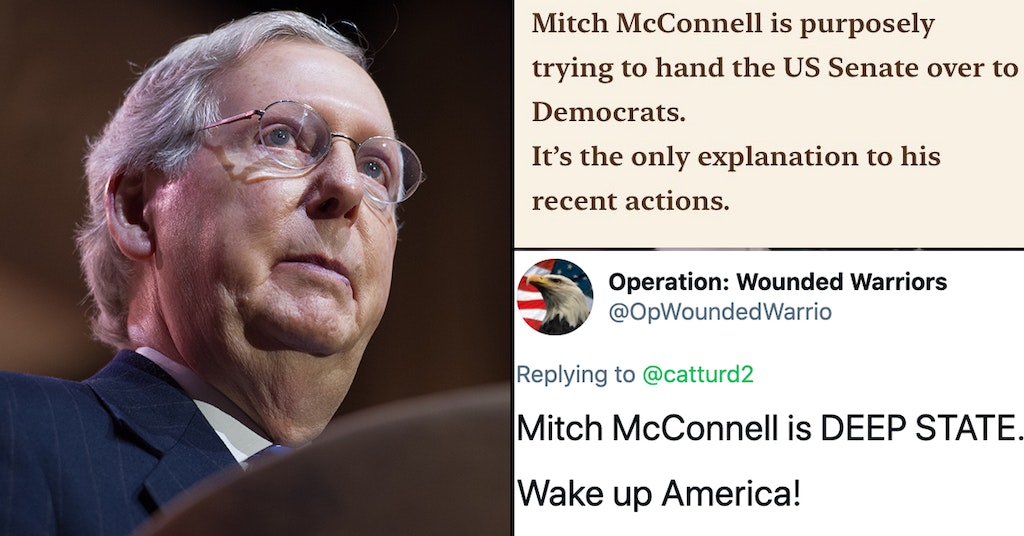 
Donald Trump is convinced everyone is out to get him.

And he’s convinced all of his supporters that everyone is out to get him — and them, and America. Everyone is the enemy. No one can be trusted. And everything that doesn’t go in his favor is a massive conspiracy put into play by…basically everyone who is not him.

The proof of the insanity that has wholly encompassed the MAGA world in the past four years, and which has ramped up in intensity since Trump lost the election in November, is everywhere you look. The conspiracy theories run rampant, and even Republican leaders who have turned a blind eye to Trump’s crimes, immorality, and foolishness over the years are now being caught up in it.

Now that Republicans have lost control of the Senate thanks to Georgia, and Joe Biden’s win has been confirmed again and again through Trump’s failed lawsuits, everyone is looking for someone to blame.

To the establishment Republicans, it’s Trump’s antics trying to undermine democracy and steal the election that cost them Georgia. To Trump and his devoted supporters, it’s Mitch McConnell’s refusal to give the American people the $2000 stimulus checks that both Trump and Democrats pushed for at the last minute that threw the elections to Jon Ossoff and Raphael Warnock rather than incumbents Kelly Loeffler and David Perdue.

And, as conspiracy theorists do, some are even beginning to take it all a step further, suggesting that McConnell not only failed the Republican party and Trump personally, but that he’s actually working behind the scenes with the liberal elite to give control of the country to the Democrats.

Yes, you read that right. Trumpers are starting to question whether the man who has consistently worked against Democrats every step of the way — steps that were often directly in line with Trump — has been simply biding his time to hope that there would be something universally hated he could do to throw two Senate races no one knew would happen to Democratic candidates that would make him lose his own authority in Congress.

Just when you think their theories can’t get any wilder, they go and surprise us.

On Wednesday, McConnell finally denounced Trump’s claims that the election was stolen after weeks of refusing to take a strong stance. His decision to finally, this one time, do what’s right for the American people will undoubtedly only further the delusion some have that he is “working with the liberal elites.” As always, Trump is the victim, and everyone else remains the enemy.