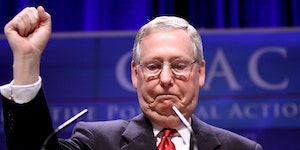 Another day, another Mitch McConnell opinion that nobody asked for.

Hewitt praised Arkansas Senator Tom Cotton, who in January offered a prescient warning about the deadly potential of coronavirus. McConnell echoed the sentiment, saying, “Tom figured this out early, and he was absolutely right.” He also said that the coronavirus threat “came up while we were tied down in the impeachment trial. And I think it diverted the attention of the government, because everything, every day was all about impeachment.”

McConnell just said on @hughhewitt that impeachment diverted the attention of the government in Jan while virus was developing. – paraphrasing but thrust is correct

While others slept, Tom Cotton was warning anyone who would listen that the coronavirus was coming for America. https://t.co/7uRsiNgh8t

Trump also suggested that his impeachment trial “probably did” distract him from adequately responding to the coronavirus spread during a Tuesday press briefing, per CNN. Unsurprisingly, he seized the opportunity to inflate his own ego.

“I think I handled it very well, but I guess it probably did [distract me],” Trump said of the impeachment. Still, he added, “I think I’m getting A+’s for the way I handled myself during a phony impeachment, OK?”

Trump played golf eight times from mid-January to early March, as the #coronavirus crisis deepened. So his attention was hardly diverted. This is BS propaganda being pushed by McConnell via @hughhewitt. https://t.co/UCqR4updul

It also seems unlikely that Trump’s impeachment impacted the White House’s decision to ship 17.8 tons of medical supplies to China last month, even as coronavirus cases appeared in the United States.

Experts now predict the coronavirus could claim between 100,000 and 240,000 lives in the United States. Hopefully, the Trump administration is now completely free of distractions to keep that toll from rising.