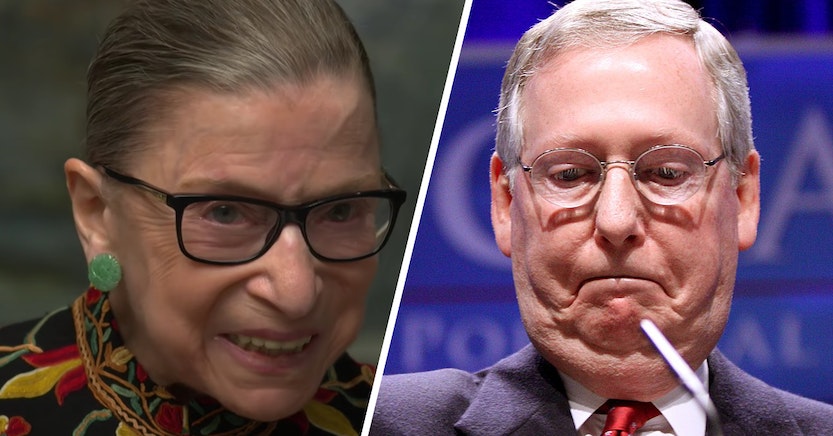 On Friday night, the news that Justice Ruth Bader Ginsburg had died broke. RBG was 87, and reportedly passed from complications from metastatic pancreatic cancer. She was regarded by many as one the few things standing between Democracy and total takeover by the GOP. While many mourned, the question of what exactly would happen to the Supreme Court in the remaining months of Trump’s first term as president was present in everyone’s minds.

Ginsburg’s last words to her granddaughter were, “My most fervent wish is that I will not be replaced until a new president is installed.”

Well, Sen. Majority Leader Mitch McConnell has promised that will absolutely not happen. He didn’t even wait 24 hours before swearing that the Senate would be voting on Trump’s nominee to take her place on the Supreme Court, pre-empting even Trump’s announcement that he would be nominating someone.

This is in direct opposition to what McConnell said during President Barack Obama’s last term, during which the Republican Senate blocked his Supreme Court nominee Merrick Garland following the death of Anton Scalia. At the time, he claimed that the “people” should have a say in who picked the new Justice via their vote for the president.

Hillary Clinton won the popular vote, but she didn’t choose the next Supreme Court Justice. Trump and his cronies did. Get ready for round two.

“Since the 1880s, no Senate has confirmed an opposite-party president’s Supreme Court nominee in a presidential election year,” McConnell said in a statement. “By contrast, Americans reelected our majority in 2016 and expanded it in 2018 because we worked with President Trump and support his agenda, particularly his outstanding appointments to the federal judiciary. Once again, we will keep our promise.”

Democrats have been tweeting furiously about the hypocrisy of this move:

Prior to Ginsburg’s death, a handful of Republican Senators pledged to refuse to consider a court appointment until after November’s election, including Susan Collins, Chuck Grassley, and Lisa Murkowski. Mitt Romney is rumored to be considering a pledge as well. We’ll see how long they hold out, but if Republicans lose four votes (and gain no Democratic votes) they won’t be able to confirm a new justice.