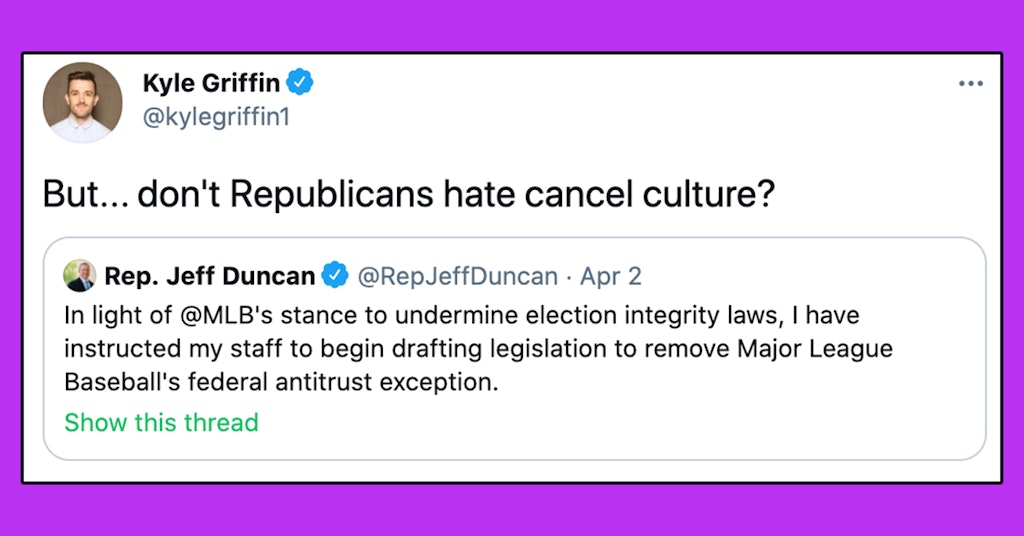 
Wins in Georgia over the last year have literally transformed Congress, with wins from Democrats Jon Ossoff and Raphael Warnock giving them Senate majority. This was made possible by the work of activists and organizers like Stacey Abrams, who infamously lost the governorship to Brian Kemp under accusations of voter suppression.

Georgia officials recently passed anti-voting laws that have already invited three lawsuits, according to Talking Points Memo, because they’ve been accused of making it harder to vote for “voters of color, new citizens, and religious communities.”

The laws make it harder to vote absentee and gives the legislature (which is GOP controlled) more power over local election officials. They’ve also made it illegal to offer food or water to people waiting in line to vote, because they apparently want to be very explicit about how evil these changes are.

In response, Major League Baseball commissioner Robert Manfred Jr. has withdrawn the All-Star Game from Atlanta, Georgia, who won the coveted bid to host in 2019. The Atlanta Braves have been trying to get the All-Star game at their Truist Park stadium ever since 2017, when it was built.

Now, Republicans are mad as hell and brandishing their favorite war cry these days: “cancel culture.”

“Today, Major League Baseball caved to fear, political opportunism, and liberal lies,” Gov. Kemp said in a statement. “Georgians — and all Americans — should fully understand what the MLB’s knee-jerk decision means: cancel culture and woke political activists are coming for every aspect of your life, sports included.”

All the other conservative talking heads jumped in to complain about organized sports, which are so well known for hating traditional values. Especially baseball.

But there are plenty of other people willing to stand up to them—and make fun of them:

Actions have consequences, even for Brian Kemp.