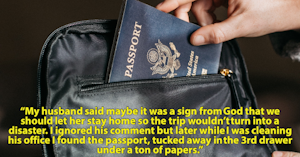 Blended families have unique challenges to overcome, but hopefully with time and support things are totally fine. And with any kind of sibling relationship, there are going to be ups and downs.

So when one Redditor wrote in saying that her husband has unfair expectations for his stepdaughter, sure. That seems normal. But then the post completely becomes unhinged.

Apparently this very religious father is going out of his way to sabotage his wife’s daughter’s relationship with his own children. He went so far as to hide her passport so she would not be able to come on an international trip with the family — and he called it a “sign from God.” Woman, call the whole man removal service, please, to take him away.

“My husband and I have been together for 3 years. He has 3 kids from his previous relationship and I have one. She’s the oldest (17). He’s a dedicated man, puts God first and loves everyone. My husband always complains that my daughter doesn’t spend time with her stepsiblings or him but she has reasons for that and that is school, health issues and work. She does her best to spend as much time with them as she can. But she on the other hand complains that her stepdad tells her to basically take on the role of a babysitter whenever she’s with her stepsiblings. My husband denied that and said that my daughter was making up excuses to not have to spend time with his kids,” the OP says.

“For this issue, I figured that a family trip is what the family need to get together and spend more time around each others. My husband liked the idea but said that his kids are now ‘uncomfortable’ around my daughter because of her ‘attitude’ and suggested we let her stay home and have the house all to herself since that’s ‘what she always wanted.’ I told him it’s best that we all go. He kept complaining til I snapped and told him to stop.”

“I booked (paid) for the whole family. However, my daughter told me she couldn’t find her passport. We turned the house upside down looking for it but couldn’t find it. My husband said maybe it was a sign from God that we should let her stay home so the trip wouldn’t turn into a disaster. I ignored his comment but later while I was cleaning his office I found the passport, tucked away in the 3rd drawer under a ton of papers. I was floored by this, I confronted him with it and he swore he had no idea why or how the passport got there.”

“I checked the upstairs camera and saw him enter my daughter’s room. That was it for me, I screamed my head off at him then cancelled the whole trip completely. He started arguing saying I overreacted and that he didn’t want his kids to be ‘miserable’ on the trip and that willing to apologize to my daughter if and when I reconsider my decision regarding the cancellation of the trip, because my stepkids will be devastated but I said it was final and that it was done.”

“He become cold and distant and said that he wants to take some time to do some fasting and get guidance from God about how he should deal with the disrespect and control I had displayed lately. AITA for cancelling it altogether?”

Um, this dad is an insufferable, abusive, and cruel a**hole. Reddit is notorious for screaming DIVORCE at every situation, but in this case? Truly? DIVORCE.

“NTA. He can’t use your daughter as free child-care for his children… so he intentionally alienates her from his family (and yes, I said his family because it is very apparent he does not consider your family his family!) Let’s see what he’s done just in your post alone…

Your, almost adult, daughter has valid reasons why she cannot spend more time, as he wants, with the step siblings… he does not think her needs are equal or even important.

Your husband orders her to babysit. She is not now nor will ever be his beck-and-call servant.

You wanted (booked and paid for yourself) a family vacation… he does not see her as family, since he made excuses and complained that she could not go against your wishes. He does not think she deserves to go on the “family” vacation because he clearly does not see her as his family.

When he could not manipulate you into what he wanted, he forced the issue himself… then allowed you to tear thru the house causing you and your daughter stress while knowing 100% what he did caused this… and had no problem with that.

He used “God’s Will” as the excuse for something he intentionally did… does he think he’s a conduit for God or God himself? (Narcissistic much?)

He lied about what he did, and when you called him out, he still continued to lie to you… and when you had proof and he ran out of valid lies… he twisted it all around saying that you are the one overreacting!

When he still couldn’t lie, argue, or manipulate what he wanted from you… he then turned to giving you the cold shoulder as a form of punishment to you. (oh you’ve hurt my little feelings! you must adjust your ways to make me feel better!! … even though this is all my fault and my own doing, but I cannot be held responsible for that!!!)

Your husband wants to control you; what you do & what you want

Your husband wants to control your daughter; what she should be spending her time on and forcing her to do things she cannot do.

When he cannot easily do that, he uses manipulation and lying in order to accomplish it.

When he is then held responsible for his actions, he turns it around on you.

When that doesn’t work, he throws a temper tantrum,” explained

“NTA. Book a trip for just you & your daughter. A MAN OF GOD?! You need to stop calling him that. It’s blatantly untrue and you need to open your eyes to his ACTIONS vs his WORDS. He’s a lying, abusive, sneaky manipulative AH who is trying to push out your daughter for himself and his kids. Your step kids should be blaming him for his disgusting actions trying to ostracise their stepsister. Without the camera, he might’ve succeeded… Do you want to be with someone that you can’t trust,” asked

“NTA. You need to take time to consider that your husband 1)stole, 2)lied, 3)gaslit you, and 4) is trying to control your and your daughter’s behavior,” noted

“NTA. If your husband wants to take this issue to God, allow me to help him get started. ‘Lying lips are abomination to the LORD…’ Proverbs 12:22. ‘Thou shalt not steal.’ Exodus 20:15. He stole from your daughter and he lied about it. Now he is trying to fault you for ‘disrespect’ and ‘control?” What about the disrespect he showed to you and your daughter? What about the control he displayed by deliberately trying to exclude your daughter from a family vacation, and lying about it? What about the disrespect he showed your daughter, presuming to decide for her that she would prefer to stay home from the family vacation? (Which, let’s face it, was the ostensible reason. It wasn’t what your daughter wanted. I don’t even believe it’s what his kids wanted. It’s what he wanted.) Please tell your husband for me that he does not love God. God is just an excuse he uses to justify some really horrible, manipulative, controlling, dishonest and disrespectful behavior. Seriously, please tell him for me. Show him my post. His conduct was absolutely disgusting. Made even more so by the fact that he’s trying to make it look like you’re the one who has the issue. Like you’re the one who’s being controlling and disrespectful. I rarely see, in this subreddit, such clear instance of projection, especially of this magnitude. Why believe a single thing he says now? He’s proven that he is manipulative and will lie right to your face. I have no doubt that what your daughter says is true: that he really does try to use her a baby sitter every time she gets together with her step-siblings. And save that video footage, and get all the proof you can. And if your home cameras happened to capture him lying about it, save that, too. If this goes to divorce court, you’ll need all the proof you can get,” said

“He does not want to take this issue to God: he claims God’s position in OP’s family!!!! He had stolen the passport then said the fact your daughter could not find is a sign from God… And he has the nerve to tell OP is controlling while he is the manipulative one?!?! OP, this man doesn’t respect you and dislikes your daughter. Everything has to be about him and what he wants (a free babysitter, free holidays with his children only). Think wisely about your next move but do not resume the trip with him. Eventually take all the kids but not him,” said

“NTA. I hope this isn’t real, because you are severely underreacting to the problem you’re dealing with here. This man who “puts God first” stole one of your daughter’s most important pieces of ID, which last I checked was a big no-no in God’s eyes. And what was his justification? That your daughter refuses to devote herself to being a second mother to his children. And now he thinks he needs to tighten the reins on you, too? You and your daughter need to get out before he decides to take away your access to anything else that might make that challenging,” advised