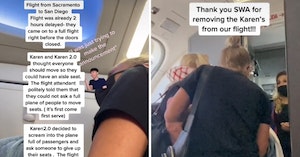 A TikTok video showing a mother and daughter being kicked off of a plane after they tried to use the intercom to ask the entire plane to rearrange itself so that they could both be sitting in the aisle together without authorization has gone viral as people collectively wonder why other people are like this. The entitled pair reportedly tried to “make an announcement” over the intercom in spite of being told they were not allowed to do this following their request to the flight attendants to rearrange the seating for them.

According to the TikTok user who recorded the incident, the flight had already been delayed two hours and the women still barely showed up in time to catch it, getting on the plane when it was already full of passengers and still expecting to get the exact seats they wanted.

“Karen 2.0 decided to scream into the plane full of passengers and ask someone to give up their seats,” wrote the video-take in overlay text. “The flight attendant had just told her they couldn’t do that.”

This appeared to result in a quiet and passive-aggressive argument between the women and the flight staff, who are likely already on edge what with all the reports of flyers being extra aggressive lately to the point that multiple people have been tied down with duct tape mid-flight. When the women finally conceded to just sit in what seats were available and stop delaying the already late place, one of them commented that the other was going to “cry and scream” and “grab on” to people.

It’s unclear whether one of them had a fear of flying or some other issue that might make the trip difficult, but the flight attendants did not take kindly to what sounded like a threat of a severe disruption while they were soaring through the air miles above the ground.

“Okay ma’am, if you’re going to say things like that, we’re going to have to put you on a different jet,” said one worker.

One of the women sounds like she then says that she’s not going to cry, but it was too late for that. The pair were officially kicked off the flight to applause from the rest of the passengers, according to the TikTok user, even though the entire incident resulted in another hour of delay for the flight. Southwest Airlines, which has not always received good press for how they’ve treated passengers, decided that a woman screaming and grabbing onto people randomly put the other folks on the flight at risk.

“Thank you SWA for removing the Karen’s [sic] from our flight!!!” the TikTok user said in her final caption.

Flight attendants might be understandably on edge right now considering the increase in cases of aggressive and even violent passengers since the pandemic started, dealing with angry anti-maskers as well as your everyday random awful people, including one man who sexually assaulted two of the flight staff before being duct-taped to a seat. The vast majority of passengers, just trying to make it through the nightmare gauntlet that is flying via commercial airline in the year 2021, have been understanding and grateful to staff who make efforts to keep everyone safe from entitled weirdos.

Comments on the now-viral TikTok video reflect these sentiments.

“If it’s so important to have an aisle seat they should have flown an airline where you can reserve your seat,” pointed out another. “Not Southwest.”

The important thing to learn here is that you should not test flight attendants right now, or maybe ever again.