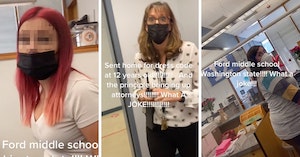 A Tacoma, Washington, mother of three daughters recently posted several videos to her Tiktok regarding one of her children being body-shamed and sent home from Morris E. Ford Middle School.

The mother, who goes by Khalesei Holt in her TikTok bio, appears to begin recording for her own protection. In the first video, a woman who appears to be school Office Manager Carly Escoto tells Holt that she is not allowed to record.

In Washington State, one can legally satisfy the state’s consent requirement to record simply by informing everyone present that they’re starting to record (and that announcement must be part of the recording). This first attempt to bully the mother out of her legal rights is unsettling. Holt informs the woman behind the desk that she will continue to record.

Holt’s daughter comes into the office at the end of the video. She is wearing grey Calvin Klein sweatpants, a dark cloth mask across her face, and a white t-shirt that has ridden up slightly. The sliver of midriff that is revealed could be concealed simply by tucking in her shirt or pulling her pants up slightly.

In the second video, Principal Heather Renner also tells the mother that she may not record the conversation, and then immediately mentions attorneys. Holt responds that she will be recording for her own protection, and insists that her daughter go back to class. The Principal says no.

“So you’re taking away her education over her dress code?” Holt asks.

At this point, Principal Renner does not respond but turns and leaves the room.

TikTok was quick to point out that this kind of “discipline” disproportionately affects young girls, and is unhealthy, and oppressive:

Many pointed out that such reprimands are often handed down by male teachers. Which makes the already gross situation feel even creepier.

Holt’s thid TikTok post in the sequence features a screenshot from the Dress Code section of the Ford Middle School Student Handbook. Holt appears to underscore her point that her daughter did not deserve to be removed from class over her clothing.

Holt brought in a replacement shirt and simply wanted her daughter to resume classes. But instead, the school called in an armed Sheriff.

TikTokkers were, for the most part, quick to rally around the mother as she stood up for her daughter.

“We strive to create a safe, nurturing, yet challenging environment that is built on positive relationships to help your child grow academically, emotionally, and socially,” claims Ford Middle School. We wonder: were they were nurturing academic, emotional, or social growth by body-shaming a twelve-year-old girl?