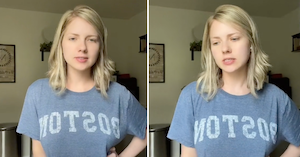 “Am I Overreacting?”—Mom Finds Babysitter Asleep And Starts To ‘Freak Out’

Sleep is one thing that a parent needs but never seems to get enough of. Socializing is another. If you’re a parent, you’ve probably heard “sleep when the baby sleeps” — but sometimes that seems hilarious because there are ten million other things to do, right? Still, you need to sleep and you need to spend time with people other than your baby. That’s when childcare steps in.

But one TikToker named Danielle who is also a mom is wondering if her babysitter was in the wrong to fall asleep while watching her sleeping child. She posted a video posing the question and asking for advice.

“Am I overreacting?” Danielle asks before explaining the situation. Basically, Danielle and her husband were going to have a night out together and it was the first time they were using a babysitter other than their parents. She said that before they could get out of the house, the babysitter was able to get the child to sleep in 15 minutes.

The family has cameras in their house, so Danielle checked on them. She noticed that the babysitter was asleep. She said that at first she thought the babysitter was listening to an audiobook, but after texting her to let the dog inside, there was no response.

“Internally, I’m starting to freak out. She’s watching our son, but she’s asleep. But he’s also asleep. But he’s only ten months, and I don’t know if she would hear him if he woke up and started crying,” Danielle said.

When Danielle got home, she also noticed the baby monitor wasn’t on. She asked her followers “is it normal for your babysitter to fall asleep when they’re watching your kids?”

Some commenters thought it wasn’t a big deal — after all, the baby was sleeping too. But some also agreed that the baby monitor should have been on.

There were some commenters who thought that it wasn’t a big deal at all the babysitter was sleeping. Some echoed those sentiments but agreed that the monitor should’ve definitely been turned on.

What do you think?