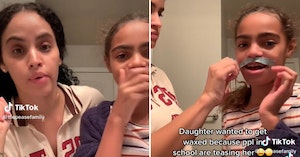 A TikTok mom became the subject of some comment section controversy after posting videos of home waxing attempts with her 10-year-old, at the kid’s request, which ended in them going to a professional salon after the DIY stuff didn’t work.

The daughter of Ashlee Pease, owner of the popular Pease Family account, asked for her brow and upper lip to be waxed because kids at school were bullying her for an alleged “unibrow” and “mustache.”

In reality, 10-year-old Giselle has gorgeous full brows and a tiny amount of hair on her upper lip, which is extremely common among women and girls, but you know how school bullies can be. Some commenters, however, felt that it was still inappropriate for Ashlee to agree to the waxing, saying she should have taught her daughter self-confidence instead.

The video shows multiple attempts to wax both areas, but the wax they got was not working very well on those tiny baby hairs. After Giselle winced and groaned through several strips being yanked off her skin, most of the hair remained, and Ashlee ultimately declared that they would have to go see a professional instead.

Ashlee states outright in the video that her daughter does not have anything that could honestly be called a mustache and says in a comment that she tried to convince Giselle that her full eyebrows are beautiful, but the kid wouldn’t listen. The unfortunate reality is that no amount of logic can stand up to the intense pressure children face from peers to look a certain way, and someone as young as 10 might not have the capacity to rise above the judgment of others.

The good news, which some other commenters have pointed out, is that Ashlee did provide a good lesson in Giselle’s right to bodily autonomy. Though painful, waxing is ultimately harmless, and child development experts stress that allowing kids an appropriate amount of bodily autonomy is essential for the formation of strong boundaries and preventing future abuse.

Still others were impressed that Giselle trusted Ashlee enough to come to her mom for help with something she was clearly embarrassed about.

“Y’all need to stop,” said one TikTok user. “This girl trusts her mother so much she came to her with this issue & her mama did what she could to help build her confidence.”

“I’m afraid to say even the slightest thing to my mother, and this girl trusts her enough to tell her about her problems,” wrote another. “She’s a good mom.”

Ashlee responded to two of the negative comments, once with the help of Giselle, that were accusing the mom of being “harsh” and “obnoxious.” The first one in particular echoes racist stereotypes about Black women that accuse them of not being “soft” or womanly enough, to which the pair responded with voice overs saying that they didn’t get it and also, who asked?

“Nobody cares, nobody asked,” Giselle lip-syncs.

Thankfully, the Pease Family seems to have far more supporters than haters.

“You seem great with an amazing personality!” Another commenter assured Ashlee. “No need to listen to haters!”